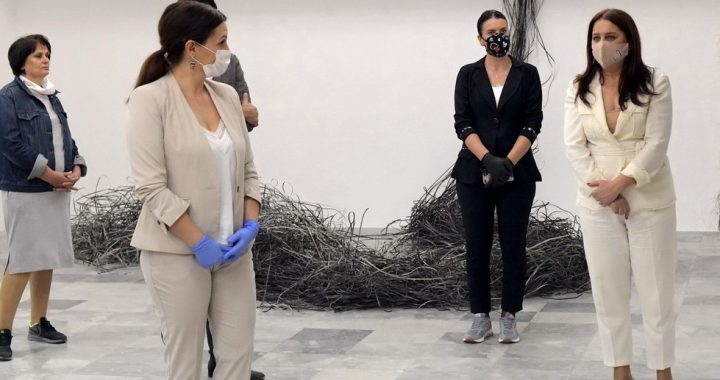 Museums and galleries reopen their doors

After more than two months spent at home, the employees of Kosovo’s two biggest artistic spaces, the National Gallery and National Museum of Kosovo, are back at work and scrambling to get the spaces ready for visitors once again.

The Kosovo Government announced that the country’s cultural institutions would be able to reopen their doors last week alongside shops and public transport, provided that social distancing measures are respected. For galleries and museums, this means operating at a reduced capacity.

Naim Spahiu, the exhibition coordinator at the National Gallery of Kosovo, told Prishtina Insight that while the Gallery is preoccupied with getting back on track with its exhibition schedule, they are allowing one or two visitors at a time to come in.

“We only have two weeks to finish organising the entire new exhibition, it’s such a pleasure to be back at work, but it hasn’t been easy to finalise everything, and only half of our staff is back working,” said Spahiu.

The curator explained that they are preparing for the International Drawing Biennale to be showcased in two weeks time. “We have a full one year program that’s been totally disrupted, but the plan is just to stay on track and move some of the later exhibitions into 2021.”

Dozens of people have visited the gallery since it reopened its doors on May 15, Spahiu said, but he predicts that large crowds will not return until isolation measures are fully relaxed. “We weren’t expecting a lot of visitors to come for the first exhibitions back,” he said. “The exhibitions that are on right now are those that were still being presented when the gallery first closed.”

The gallery, which is split across two floors, is currently showcasing Burim Gashi’s exhibition ‘Heavy Silence,’ a series of huge steel sculptures. Through the artworks, Gashi sought to represent the weight of the silence felt visiting places in which traumatic events took place, or when remembering traumatic experiences of war, violence or missing loved ones.

Upstairs, the World Press Photo award winners are still being showcased, the best of visual journalism from professional photographers across the world throughout 2019.

“There have been quite a few people going in and out, we will just respect social distancing and keep the gallery open as normal,” Spahiu said. “To be honest, what we’re worried about right now is how to proceed with the opening nights of the exhibitions. Usually, we have around 200 people at every exhibition opening. Perhaps our only option is to only invite the artists, and then do a virtual gallery opening.”

Throughout March and April, the National Gallery has been publishing virtual exhibitions on their social media platforms, encouraging visitors to take a virtual tour of the gallery instead of coming in person.

Virtual exhibitions included a series of drawings from artist Muslim Mulliqi and Driant Zeneli’s ‘In an effort to get me going,’ which featured a short documentary in which Zeneli narrates the 3D virtual tour around his installation, which was originally showcased at the National Gallery in December.

The Gallery also launched its ‘Virtual Museum Series’ in March, making various pieces of art from their collection available to view on their website and Facebook during the lockdown, accompanied by descriptive text from curator of the gallery Zeni Ballazhi.

The National Museum of Kosovo is also welcoming visitors back, and its staff are taking precautionary measures to ensure the safety of visitors. Attendees of the museum are greeted by its most famous artefact, the Goddess on the Throne, stitched onto employees’ matching face masks.

As Kosovo residents await the further relaxation of measures on June 1, Leci hopes that there will be increased support for galleries and museums in Kosovo. “The pandemic has had a pretty negative effect on artists and cultural institutions generally, but as things are beginning to ease up, we’re looking forward to more visitors coming,” he said.

Agata Cetta’s exhibition ‘Repatriation’ was showcased on the National Museum’s website, a series of clay dishes inspired by the most common artistic motifs that can be found on the thousands of artefacts that were taken to Serbia before the war and never returned to Kosovo.

“Initiatives to return Kosovo’s cultural heritage have been few, and there has been a lack of consistent access to them at Kosovo institutions, and as a result, even after more than 20 years, the situation is unresolved,” Cetta stated in the exhibition description.

According to her, this virtual exhibition may be the chance to raise even more awareness of the thousands of pieces of Kosovo’s cultural heritage that are still missing.

“The repatriation of archeological artefacts and ethnographic objects is of key importance for Kosovo’s present and future,” she said. “We are taking advantage of the virtual nature of the exhibition to help spread the message wider in public. Given the large presence of all spheres of society on social networks, I hope this [exhibition] will help to advance us toward this goal.”

The Ministry of Health foresees the opening of other cultural institutions, specifically cinemas and theaters, on June 1 depending on the epidemiological situation in the country, as measures to prevent the spread of coronavirus are eased.