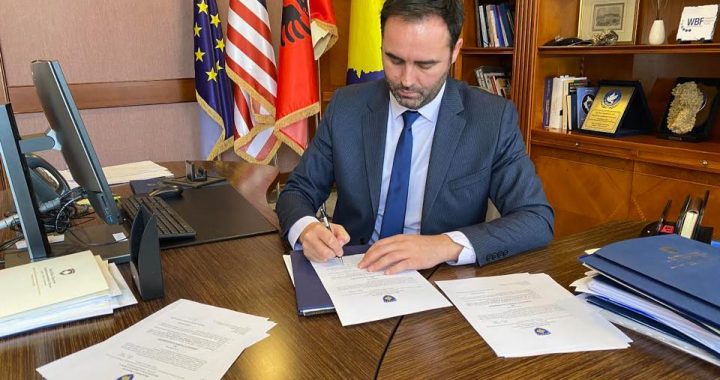 On Thursday, the Ministry of Foreign Affairs cancelled the employment of 14 consuls, while the Ministry of Justice suspended a controversial process to employ public notaries.

Two big decisions were taken by Kosovo’s new political institutions on Thursday, as the recently elected coalition government sets out to put its stamp on the country and undo decisions made by the previous administration.

In a Facebook post, new Minister for Foreign Affairs and Diaspora, Glauk Konjufca, announced that he had reversed a number of what he described as ‘unlawful’ decisions made by the previous government in relation to appointments in the foreign service. The recruitment of 14 consuls at Kosovo’s embassies abroad were annulled as a result.

Among the 14 who saw their positions terminated on Thursday were Diellza Hoti, previously an advisor to former prime minister Ramush Haradinaj who was appointed to the Kosovo Consulate of the United Arab Emirates. Festim Lushtaku, the nephew of former Skenderaj mayor Sami Lushtaku, also saw his position as consul at the Consulate General in Albania terminated.

Halil Matoshi, another former senior advisor of Haradinaj, praised the decision. “By not leaving Kosovo’s diplomacy in party militant hands, [..] even I as a political rival will applaud strongly,” Matoshi stated in a Facebook post. “If he manages to close the door to functionally illiterate people and keep them out of the system by giving credibility to public vacancies then I will only say ‘bravo.’”

“In recent years, PIPS has consistently called for compliance with the legislation in force in relation to the diplomatic and consular service of the Republic of Kosovo, which has suffered from political interference, damaging Kosovo’s international representation,” the organisation said in a press release.

“Today’s decision should be seen as the beginning of the establishment of meritocratic practices within the diplomatic service, which would provide Kosovar citizens with the international representation they deserve.”

Earlier on Thursday, new justice minister Albulena Haxhiu announced at a press conference that she has suspended the process of increasing the number of public notaries which was launched by the previous government in April 2019.

Haxhiu stated that all qualifications received as part of the process had been annulled, and that payments for sitting the exams would be refunded. She added that the ministry had also repealed the decision to appoint a notary commission, whose members were due to serve a three year term.

The process for recruiting notaries had come under scrutiny after allegations emerged that many candidates who had passed the written exam had close connections with political figures, as well as those on the notary commission.

BIRN reported in July 2019 that Gentiana Bajraktari, the daughter-in-law of the Commission’s chairman who compiled the exam questions, Nehat Idrizi, was one of the successful candidates. Out of 584 candidates that took the written exam in June, 235 passed, around 50 of which were reported to have connections to either Democratic Party of Kosovo, PDK, officials or the notary commission.

“[The process] cannot be pushed forward when the majority of candidates who have passed the notary exam are party militants, or family members or friends of members of the notary commission,” Haxhiu stated at Thursday’s press conference.

In October, the Ministry of Justice under former minister Abelard Tahiri announced that Kosovo’s Anti-Corruption Agency had given an advisory opinion on the exam process, which stated there had been no conflict of interest involving the commission members throughout the entirety of the process.

Responding to Haxhiu’s decision on Thursday, Tahiri described the cancellation as “baseless” and threatened legal action.

“This arbitrary action today will produce legal and administrative consequences, because it represents a flagrant violation of the rights acquired by the citizens of the Republic of Kosovo,” Tahiri stated in a Facebook post. “Therefore, on this basis, I will plead this case to the court’s department for administrative matters and request recognition of the notary examination for all candidates who have passed the examination.”

Tahiri also encouraged other successful candidates to pursue legal action. “I urge each candidate to exercise their legal right to defend their legal interest in the face of this injustice,” he concluded. “See you in court!”

Before Haxhiu’s announcement, a group of notaries in Peja had responded to speculation that the process would be suspended by promising legal action. “We ask the Minister of Justice, Mrs. Albulena Haxhiu, not to take any unlawful action without legal basis because we will not stop claiming our legally acquired right,” the group said in a statement made to Telegrafi. “An unlawful decision will be attacked through every legal avenue and judicial instance in the country.”