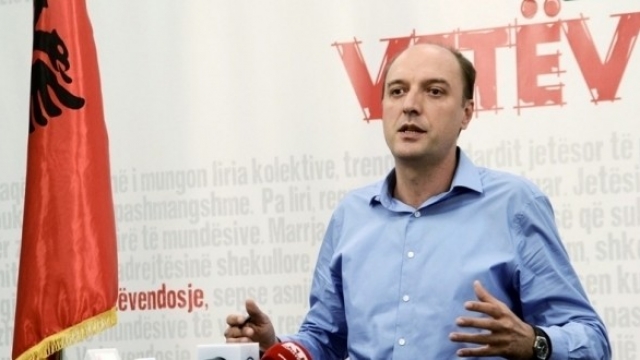 No breakthrough for Vetevendosje after 7-hour meeting

Former party leader Visar Ymeri said that there is no will for internal consensus after a meeting of Vetevendosje leaders, while parliamentary speaker Glauk Konjufca emphasized that the parliamentary group maintains a unified policy vision.

The meeting was called after multiple members of the party resigned from party leadership positions, claiming that an atmosphere of “defamation” was making it impossible for them to continue their work.

While Prishtina Mayor Shpend Ahmeti said the meeting was “relatively short,” Albin Kurti, the only current candidate running for Vetevendosje president, said only that it was “a long meeting” and that discussions are ongoing.

After the meeting, Ahmeti, who has not abandoned his leadership positions within the party, told journalists that media appearances are making the road to unification within the party more difficult, and that a solution has not been found yet.

“We have not managed to reach an agreement. I do not want to raise or lower anybody’s hopes. Of course we are not happy, divided we are weaker,” Ahmeti said.

In December, a Viber conversation leaked to the media in which Vetevendosje MP Aida Derguti insulted Albin Kurti by calling him a “shit.” Vetevendosje members and activists took to social media to discuss a potential split within the party into two camps — one in support of Kurti and the other, led by MP Dardan Molliqaj, against him taking the party leadership.

Visar Ymeri, former leader of the party who resigned weeks before regular leadership elections were scheduled, said that he does not see the will for internal agreement for the party.

“There is not progress in that direction. I do not see a possibility for consensus some agreement. I did not see the will,” Ymeri said on Monday.

“We will stay together as a group and we will have unified views regarding national issues, regarding the Special Court and the demarcation agreement [with Montenegro] too,” Konjufca said.

Konjufca said that the party knows the reasons why members Aida Derguti and Faton Topalli did not participate in the meeting, but he did not disclose them.

Meanwhile, MP Liburn Aliu briefly said that Kurti’s candidacy was not discussed in the meeting.

“Kurti’s candidacy was not touched upon. I was more pessimistic, now I am more optimistic,” Aliu said.