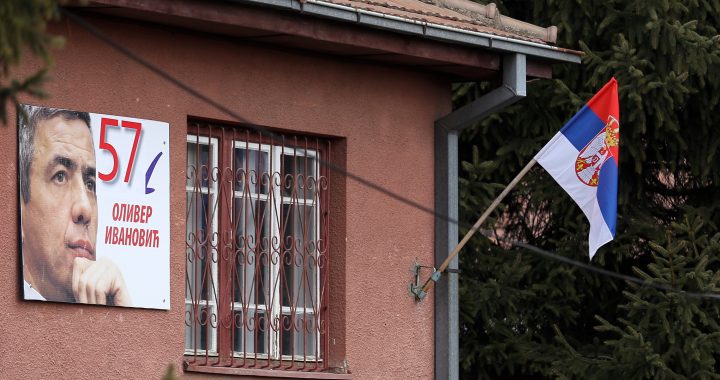 A Serbian flag and a picture of assassinated Kosovo Serb politician Oliver Ivanovic are seen on his office in northern Mitrovica. | Photo: BETA, AP Photo/Bojan Slavkovic.

“He will go to northern and central Kosovo on Saturday to speak with our people about the unrest that they deal with, to be with them in the most difficult moment and to build the strength that we need together in these difficult times,” Djuric said.

Djuric also said that the Brussels-facilitated Kosovo-Serbia dialogue will be postponed until light is shed on Ivanovic’s killer, Serbian media reported.

He said that the perpetrator needs to be captured.

“Our duty is to try and shed light on the killing, and Serbia will not twiddle its thumbs until Ivanovic’s killer is brought before justice.”

In a press conference after a Kosovo Security Council meeting on Tuesday evening, Prime Minister Ramush Haradinaj said that he was never against any visit of good intent.

“Nobody needs to worry about the security of Kosovo Serb citizens because Kosovo institutions are on duty, adding that we also have KFOR, which constitutes the third level of security. Visits like that have happened and they may happen, but state institutions are the guarantee of security for the citizens of the north,” Haradinaj said.

After previous threats, Ivanovic had said that he informed the leadership of Serbia, Kosovo, the international community, EULEX, prosecutors, and the peacekeeping force KFOR about the threats and pressures on him.

On Tuesday, Kosovo officials made statements condemning the killing of Ivanovic and called on authorities to immediately investigate the case.

Strongly condemn the murder of Oliver Ivanovic today in northern Mitrovica. Kosovo law enforcement agencies are investigating the case with utmost urgency. To avoid political manipulation, responsible actors should be brought to justice as soon as possible. 1/2

President Hashim Thaci appealed “to the citizens of all communities in the north of the country to cooperate with the justice authorities for the quickest possible clarifying of this assassination,” a statement from his office said.

Shpend Maxhuni, Kosovo Police spokesperson, informed that a burned car found about an hour after the shooting was brought to Prishtina for investigation, and that although it lacked plates, the police had found sufficient information about the car’s origin and ownership.

“We have had the necessary information about the car’s origin and ownership for a period of time. I cannot give more details but the information we have about the car are sufficient to trace further the owner of the car,” Maxhuni said.

In an exclusive interview for BIRN, Arsim Gerxhaliu, head of the Kosovo Forensics Institute, explained that Ivanovic was shot six-times at a close-range.