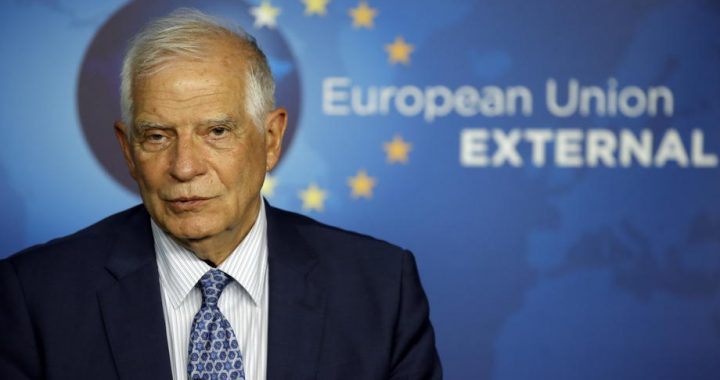 No Deal Yet for Kosovo-Serbia Dialogue

The third EU-mediated meeting for the Kosovo-Serbia dialogue between Kosovo PM, Albin Kurti and Serbian President Aleksandar Vucic has ended in Brussels with no concrete results.

Almost  a year after their last meeting,  and after rising tensions in early August in the north of Kosovo, Kosovo PM, Albin Kurti, and Serbian President, Aleksandar Vucic, met the High Representative for Foreign Affairs of the EU, Josep Borrell, both separately and in a joint meeting  in Brussels on Thursday.

After the tripartite meeting, Josep Borrell, said that Kosovo and Serbia have not reached an agreement on the issue of Serbian license plates and the documents.

“Unhappily we did not yet reach an agreement today… No, sorry… But this is not the end of the story. Both leaders agreed that the process needs to continue and that discussions will resume in the coming days. There is still time until September. I don’t give up,” said Borrel in the press conference.

Borrel said that the meetings of Thursday were not normal or regular, but were “meetings for crisis management”.

“We are in critical times for Europe, we are seeing the return of war to our continent, after the Russian occupation of Ukraine. We are facing a dramatic and dangerous moment. This is not the time for increased tensions. The time is to look for solutions to open issues,” he added.

Not much was said from any of the other parties after the meeting.

“We have two undisputed leaders that we expect to make mature decisions”, Lajcak briefly responded to the media after the joint meeting ended, but refused to comment on the content of the discussions. He added that he does not want to see Kosovo in September in the same situation that it was on July 31st.

The agreement between Kosovo and Serbia should be legally binding and aim full normalization with mutual recognition at the center of it, the press statement said.

Vucic, through a video message on Instagram, considered the day of the meeting as a difficult day for all citizens of Serbia.

“I can’t say that it went well, but refrain from all comments, as I hope and believe that it is possible that, by some miracle, a compromise agreement will be reached in the days ahead of us. I will continue to fight for peace and stability. Within 48 hours I will give them all the facts”, said Vucic.

Meanwhile, Vucic scheduled a meeting with the Serbs of Kosovo,  Serbian media B92 and Novosti reported. He invited all political and institutional representatives of the Serbian community in Kosovo, including mayors and directors of hospitals.

The head of the Office for Kosovo in the Serbian Government, Petar Petkovic, told media that the Serbian delegation has “struggled” for a compromise solution.

“What is important is that we fought for peace, for stability, for compromise solutions,” said Petkovic.

He declared to the media that Vucic will stay for a while in Brussels and that tomorrow, when he returns to Belgrade, he will give one of the most important speeches for the public.

After separate meetings with Kurti and Vucic, Joseph Borrel wrote on Twitter that he expects from both leaders to be open, flexible and to find common ground. He added that the tensions in the north of Kosovo have demonstrated that it is time to move forward towards full normalization.

I am convening this morning the High-level Belgrade-Pristina Dialogue meeting.

Recent tensions in the north of Kosovo have demonstrated yet again that it is time to move forward towards full normalisation. I expect both leaders to be open and flexible to find common ground. pic.twitter.com/T0AhjKd1D3

The tripartite meeting took place under the framework of the EU-facilitated dialogue between Kosovo and Serbia, that aims to reach a final agreement on the disputes between the two countries.

The meeting was called by Borrelli after the tensions created on July 31 in the northern municipalities of Kosovo mainly inhabited by Serbs, as a result of the decision for reciprocity from the Government of Kosovo on license plates and reciprocity for documents with Serbia, which was supposed to come to force on August 1.

Meetings the Secretary of NATO

Due to the tensions between the two countries, one day before the meeting in Brussels, Kosovo and Serbia leaders met separately Secretary General of NATO, Jens Stoltenberg,  the envoy of the United States for the Western Balkans, Gabriel Escobar and EU Special Representative Miroslav Lajcak.

Kurti told media that he discussed with Lajcak and Escobar the “elements of the framework for the agreement on the normalization of relations, which should be based on mutual recognition, as well as on current issues”.

After the tensions in the north, following the request of the Western allies, the Government of Kosovo agreed to postpone the implementation of the decisions until September 1.

Stoltenberg on Wednesday said that the situation on the ground has improved, although the NATO mission in Kosovo, KFOR, is observing the situation and is ready to intervene in case of destabilization of the situation.

“If there is a need, we will move our forces and increase our presence. We have already increased our presence in the north. We will act when necessary, and proportionately,” he reconfirmed.

The same message was sent in early August, after Stoltenberg met Vucic. “NATO stands ready to intervene if stability is jeopardized, based on its UN mandate”, he had written on Twitter.

Kosovo and Serbia have contradictory positions  on the outcome of the final agreement between the two countries, which would conclude the negotiations process that has been going on since 2011.