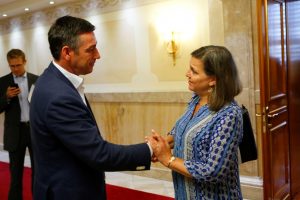 During a visit to Kosovo on Sunday, Assistant Secretary of State Victoria Nuland met Kosovo leaders to discuss the border demarcation deal between Kosovo and Montenegro and the formation of the Kosovo Armed Forces.

During the meeting, Nuland emphasized the importance of addressing the border demarcation deal, an agreement which has been strongly contested by the opposition and by those living in the disputed territory. Nuland said that ratification is pivotal to opening the way for Kosovo’s international integration.

In addition to Mustafa, Minister of Justice Hajredin Kuci and Minister of Foreign Affairs Enver Hoxhaj were present at the meeting with Nuland.

According to a press release by the prime minister’s office, Mustafa and Nuland discussed the commitment of Kosovo’s institutions to addressing important issues regarding the future of Kosovo’s Euro-Atlantic integration.

“In this context, Prime Minister Mustafa said that Kosovo institutions, based on the support offered by the United States of America, will address the issue of the border demarcation between Kosovo and Montenegro, thus paving the way for the free movement of Kosovo citizens within the EU,” the press release states.

Mustafa spoke about a government restructuring, stressing that it will include a downscaling of his cabinet, admission of new staff, and said he would make an effort to accelerate the process.

In a subsequent meeting with Veseli, Nuland also spoke about the transformation of the Kosovo Security Forces, FSK, into the Kosovo Armed Forces, FAK.

“Veseli and Nuland discussed the transformation of the Kosovo Security Forces as a very important process for strengthening the state,” a Kosovo Assembly press release informed.

While emphasizing U.S. support, Nuland said that strengthening the rule of law and the legal system and fighting corruption and organized crime will be imperative for Kosovo’s development.