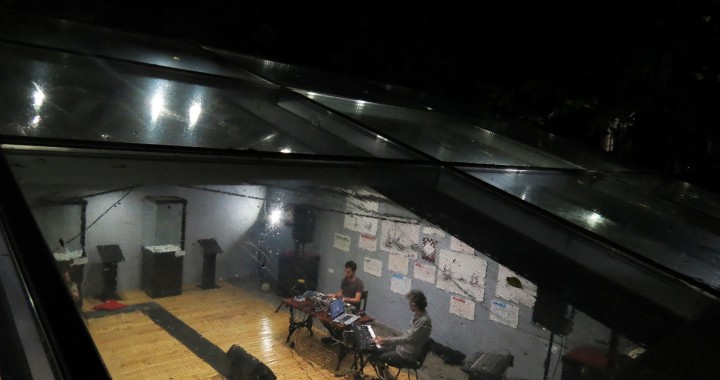 Liburn Jupolli and Ilir Bajri kick off a series of concerts showcasing a mix of traditional Albanian music and modern sounds.

The first in a series of five concerts focussing on blending ancestral Albanian music and modern tunes got underway through a goosebump inducing performance by Liburn Jupolli and Ilir Bajri.

The series is a collaboration between the Kosovo Museum and the Kosovo Society of Music and Technology, KSMT.

Skender Boshtrakaj, the director of the Kosovo Museum, stressed the importance of restoring local age-old music.

“Apart from organizing numerous concerts that will endeavor to blur the dividing line between old and new music, we also want to create a debate on our rich musical heritage,” he said.

Even though the concert was supposed to be held at a small amphitheatre at the Archaeological Park, the instruments were moved inside an emptied lapidarium in order to avoid the rain.

The tangled cables were plugged in and the musicians started sliding their fingertips across synth keyboards, computers, amps, and other electronic machinery. The two artists kicking off the series, Ilir Bajri and Liburn Jupolli, are well established locally and well known for their experimental yet distinct styles. In fact, Bajri has recently shared an album with his own experimental Albanian folk music online.

As the last rays of sunlight faded behind the overcast sky, Bajris and Jupolli’s perfectly timed beat swayed people into gently shutting their eyes and tapping along.

Although most of the audience was drenched thanks to the pouring rainfall outside, each drop gradually evaporated as the musicians started to handle their keys and buttons.

Jupolli, who is known for building his own instruments from scratch, played variously-pitched horns and digitized drums. Bajri, a musician who is very comfortable with frequent changes in register, played prerecorded mutterings in Albanian coupled with basslines and clear melody.

As the performance progressed, their subtle communication made the synergy seem effortless. Even the few, unavoidable out-of-key notes fit in flawlessly. The reverb became stronger and the audience’s expressions turned soft and smiling.

After about an hour, the musicians took a sudden yet well-deserved pause and got up to dance valle, a traditional Albanian dance, for about one minute. It seemed unplanned and quirky, but enjoyable nevertheless.

When the rain finally ceased, many hurried outside to light a cigarette or crack open a cold one. Ordinary conversations and heartfelt laughter quickly ensued while children pranced on the cobbled ground.

The crickets woke from their daylight slumber to start running their noisy errands and the faces engraved on the ancient tombstones seemed to enjoy the company.

After the break, Bajri and Jupolli joined the fray once more for a few parting songs. As their tunes shapeshifted to chimes and horns and harps, guests dispersed as slowly as the cigarette smoke that wafted around the fluorescent lamps.

The next concerts in the series will be held on July 13, 20, and 27. The stage will be open to musicians like Arber Salihu, Edona Vatoci, Eremira Citaku, Blerta Kosova and more. To see the detailed program, check out KSMT’s Facebook page.