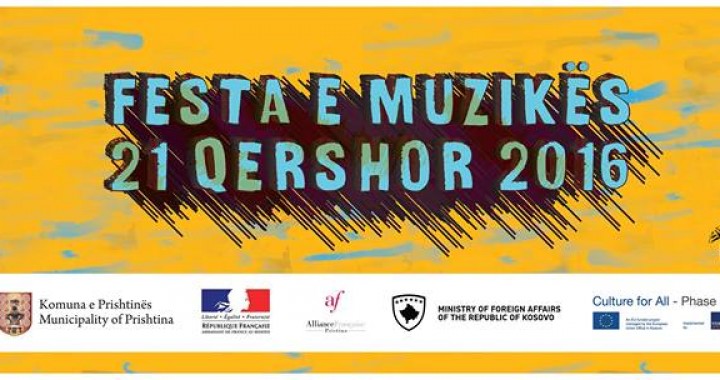 The so-called Music Party, a traditional French holiday marked around the world on June 21, will take place from 10 a.m. to midnight at the Zahir Pajaziti square in Prishtina.

This Tuesday, several musical performances will honor the Fete de la Musique celebrations, which has been organized by the Municipality of Prishtina in collaboration with the French embassy in Kosovo, Alliance Francaise, ‘Culture for All,’ the Ministry of Foreign Affairs, and the Kosovo Philharmonic.

The performances will begin tomorrow at 10 a.m. at the Zahir Pajaziti square in Prishtina and will continue until midnight.

Saranda Bogujevci, Director of Culture at the Municipality of Prishtina, said that this festival is in the process of becoming a Prishtina tradition.

“This is the third year that the festival is being organized. It was something initiated by the French embassy before that, but these past three years were a great collaboration between the municipality, the embassy, and other partners,” she said. The program starts in the morning with a children’s performance.

“Apart from the performance by children from the Alliance Francais and the children’s choir, new bands will also play because one of the main reasons for the programme is to promote the youth,” Bogujevci said. The young artists that will be performing include: Yll Daklani, Art Krasniqi, Ilda & Tringa, Fart & Scream, Under, Lovers, and Dj ØstFlux.

French embassy representative Lise Moutoumalaya emphasized that this is a special event celebrated all around the world. She is pleased to see Prishtina take part in the festivities.

“The festival was founded 35 years ago and allows for musical diversity and different tastes and genres,” Moutoumalaya said.

At five in the afternoon, the Kosovo Philharmonic will perform “Pjetri dhe ujku” (Peter and the wolf), conducted by Nathalie Marin.

Baki Jashari, the director of the Kosovo Philharmonic, promised that the philharmonic has prepared a fantastic performance for the programme.

“We will perform the orchestral rendition of the story “Pjetri dhe Ujku,” which was written in 1936 and on its 80th anniversary it will be performed in Kosovo for the first time,” Jashari said.

The event will end with the Synth Championship, developed  by the Kosovo Society for Music and Technology and led by musician Liburn Jupolli. This final performance will showcase several established and up-and-coming artists from Kosovo (Ilir Bajri, Tomor Kuci, Blerta Kosova, Liburn Jupolli, Arber Salihu, Dren Suldashi, Timur Xhabir), as well as the French artists Lucien Favreau and Maylis Raynal.