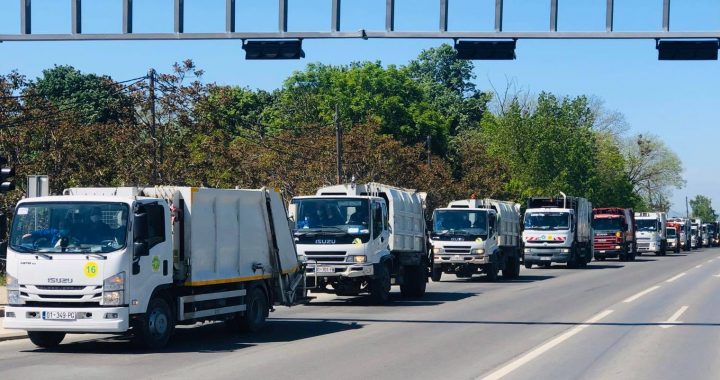 A lack of provisions for employees of the publicly owned waste management company Pastrimi in the government’s emergency fiscal package has led to two protests in a week, with the CEO telling BIRN that the company’s financial issues could halt its services.

A parade of refuse collection trucks circled around Prishtina on Wednesday, as employees of the publicly owned waste management company ‘‘Pastrimi” protested a lack of provisions for their sector in the Kosovo Government’s emergency fiscal package. It was the second protest held by Pastrimi employees from across Kosovo in the space of a week, following a previous demonstration on May 8.

The emergency package is designed to cope with the impact of the coronavirus outbreak on the country’s economy. Its provisions include salary top-ups of 300 euros for workers directly exposed to risk of the virus, including doctors, prison guards, firefighters and employees of Kosovo Police. It also foresees additional payments of 100 euros to employees at supermarkets, pharmacies and bakeries.

However, refuse collectors are not provided for, despite being required to work throughout the pandemic. “These are the people that, along with medical staff and the Kosovo Police, were working 24 hours a day, during these months,” Burim Kelmendi, the CEO of Pastrimi told BIRN.

The company has been publicly requesting to be included in the package since its announcement on March 30, leading up to May’s protests.

But according to the Ministry of Finance and Transfers, who designed the 170 million euro emergency fiscal package, the government aimed to give assistance to those workers’ who lost their jobs or stopped working because of coronavirus. The package offers 170 euros a month for March and April for workers not receiving salaries, which according to ministry spokesperson Muharrem Shahini is not the case for the 700 workers of Pastrimi.

“There are workers from different sectors who were obliged to go into lockdown and not work. In the case of Pastrimi, people have been working and the contractor is obliged to pay full salaries to the employees,” Shahini told BIRN.

In terms of salary top ups, Shahini told BIRN that the risk Pastrimi’s workers were exposed to could not compare to those provided for in the emergency package. “The street cleaners cannot be compared with the risk that cleaners at the hospitals undergo, as the workers cleaning the hospitals and Family Medical Centres are exposed to more risk.”

The Social Democratic Party publicly criticised the government for not including Pastrimi employees in a Facebook post on Wednesday, emphasising the risk to cleaners’ health during the pandemic. “They do their work at the University Clinical Center of Kosovo, where most of those affected by Covid-19 are treated, as well as at the Student Center where quarantine has been imposed.”

Pastrimi CEO Kelmendi told BIRN that the company is in serious financial trouble, as it has lost around 1.2 million euros in unpaid bills since the pandemic began and exhausted all of its reserve funds. He added that the only expenses currently being paid are for petrol and workers’ salaries.

Kelmendi warned that without government assistance, the company’s ability to pay salaries, and therefore the continuation of its services, were under threat. “We are not for organising strikes,” he said. “But, if we are unable to pay salaries, we cannot call our employees to come and work, and we would have to stop providing our services.”