Peja: A summer snapshot of a town

Nestled below the Rugova mountains, residents of Kosovo’s fourth largest town beckon visitors with a great mix of culture, history, and outdoor-activities.

The road from Prishtina to Peja goes over undulating hills and through villages with bare brick houses. On the day we set out to discover Kosovo’s fourth largest town, the traffic was quite heavy, especially for a weekday morning, and many cars displayed foreign number plates, from Sweden, Switzerland, and other countries in between.

Peja is a hot summer destination for many “Schatzis,” as Kosovars call their compatriots who live abroad. But it is also increasingly on the map for foreign tourists.

The reason became quickly clear as I started seeing the stunning Rugova mountains, tall in the shape of an amphitheater with Peja at center stage. As I explored the town and its surroundings in the company of photographer Atdhe Mulla, I discovered a great mix of culture, history, and nature, cherished by its residents.

“People come to visit and shop in Peja from everywhere,” Arben Belegu explained to us. He sat proudly behind the counter of his leather store selling handmade horse tack, belts, punching bags and more. “Here we are still about quality rather than quantity, and many of these artisanal products you can find only in Peja,” he noted. 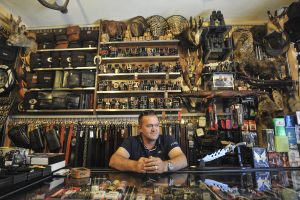 Arben Belegu, 45, sits behind the counter of his leather store. He comes from a family of four generations of leather artisans. | Photo: Atdhe Mulla

Belegu, 45, comes from a family of four generations of leather artisans. At age eleven, he started to learn the craft and today he runs the family business with more than ten employees and various stores across Peja. “Every day I get to work to create and sell products that are representative of my family’s history,” Belegu said.

Although pleased with his work, he complained about how times are getting harder.

“Hand-made goods can hardly compete with mass-produced goods, and there is little interest in the young generations to continue the craft. Even my own sons have made different career choices,” said Belegu, adding that his youngest employee is in his forties. 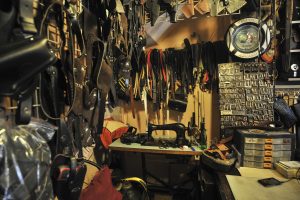 Leather belts are one of the most popular handmade products in Peja’s old bazaar. | Photo: Atdhe Mulla

In fact, for centuries, Peja was known as a town of merchants and artisans and its traditional handicrafts remain one of the town’s main attractions.

But walking through the cobblestoned old bazaar originally built in Ottoman times, I spotted only a few artisanal shops amidst many commercial stores that could easily belong to any modern day shopping mall. A stark contrast that got me wondering about how much Peja’s artisans are at risk of being completely displaced by cheap consumer culture.

However, judging by the size of the crowd walking around the city center, people seemed to enjoy the possibility to pop into one store to buy a sweatshop-made football shirt and then go to the store next door for a locally handmade plis or other traditional garments.

Sheria Berisha, a 58-year-old native of Peja, has been a seamstress for as long as she can remember and sells traditional dresses and costumes a few steps away from the central Bajrakli Mosque. “I used to work from home, then five years ago I decided to open a little shop,” she said. 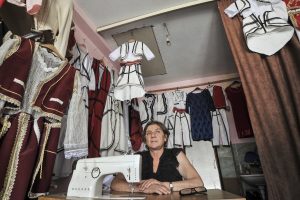 Two sewing machines sat ready to be used in the middle of her shop, while a great number of colorful dresses and bright fabric covered all the walls. Berisha works in this space on her own, she explained, seldom asking for the help of other local seamstresses when the workload is larger.

“I have some loyal customers but people mostly come once to buy a dress or a vest for some special occasion,” Berisha said. “Even if these costumes don’t have the same value they used to, it makes me feel proud to produce something that represents a very special tradition,” she added.

In Peja and surrounding villages, traditional costumes are still worn for weddings and other celebrations. Different regions have different motifs and details that are decorative as well as symbolic. 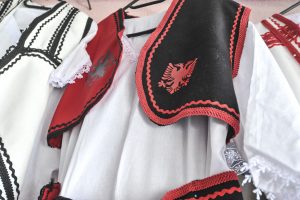 Culture, from past to present

Visiting Peja was actually somewhat of a journey through time.

The influences of many civilizations have left a mark on the town, with buildings and religious sites revealing Roman, Byzantine, and Ottoman characteristics.

I felt a palpable sense of history dating back centuries, walking along the cultural trail proposed by the municipality.

One of the suggested stops was the ethnographic museum, where exhibitions about Peja’s cultural and archeological heritage offer a glimpse into its rich past.

“This is a small museum with a big heart,” Sefer Lajqi said at the beginning of his museum tour. “We are very proud to be located in the Tahir Bey Inn, one of the most beautiful examples of old residential houses that we have in Peja,” he added. Lajqi, a doctoral candidate in archaeology at the State University of Tirana, has been working at the museum since 2012 and was the curator of the archaeology exhibition. “I am Peja’s Indiana Jones,” he joked.

Peja is one of the oldest inhabited places in Kosovo, Lajqi explained. However, most of its residents and visitors are unaware that artifacts as old as 6,000 years have been discovered in Peja and several archaeological sites have been identified in and around the city.

“There is huge archaeological potential in this region and little has been excavated so far. I hope this will change in the future and we will really begin to protect our cultural heritage,” Lajqi said as we ended the museum’s tour. 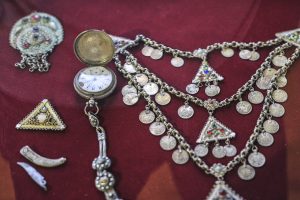 But Peja’s cultural scene is not only about the past.

Every summer, the city hosts the Anibar International Animation Festival, a unique event in Kosovo that has been making huge strides since its first edition in 2009.

I met Vullnet Sanaja, one of the festival’s initiators, in Peja’s only cinema, ‘Jusuf Gervalla’, which lies on the south side of the Lumbardhi river running through the center of the town.

“This year’s edition will be our biggest one yet,” Sanaja told me. The excitement in his voice conveys passionate and hardworking determination. “We will screen 280 films in five locations, hold six workshops with renowned professionals, and many other side events. There will be something for everyone,” he said.

Eight years ago, Sanaja and a group of friends, all then aged between 16 and 18, launched the festival with 80 films and the help of their families.

This year, a team of about 100 volunteers is getting ready to welcome over 9,000 animators, artists and audiences during the 8th edition of the festival, set to take place between August 14-20.

But the past months have been particularly rough, with ownership over the cinema Jusuf Gervalla pitting the artistic community of Peja and the rest of Kosovo  against the privatization agency.

Anibar helped lead that fight, and “Reclaiming the city” has been subsequently set as this year’s theme to highlight the issue of public space in Kosovo, Sanaja explained.

“When we started Anibar, our aim was not only to organize an animated film festival in Kosovo, but also to resurrect Peja’s cinema,” Sanaja said, stressing that the privatization process has momentarily stalled thanks to public pressure. 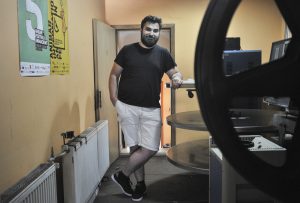 Vullnet Sanaja, 26, is getting ready with his team for the 8th edition of the Anibar International Animation Festival. | Photo: Atdhe Mulla

The Anibar team wants to organize year-round activities at the Jusuf Gervalla and bring the town’s contemporary cultural side back to life.

“The idea is to screen movies all the time and revive the locals’ interest in this space,” said Sanaja, adding that they are also considering showcasing the cinema’s old film projectors and other film materials in a museum within the building.

From city to nature

Besides its history and culture, Peja’s unspoiled nature has also put the town on the map.

The deep Rugova canyon, where one can admire the mountains from below, is only a short drive away from the town, following the Lumbardhi river upstream.

“Close your eyes and listen to the river,” Mithat Nallbani told me the first time I met him on the banks of the river. “It only takes a moment to forget the chaos of the city and feel better,” he claimed. 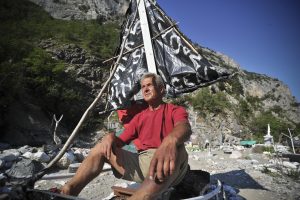 Mithat Nallbani sits on a “sailing boat,” one of his creations in the middle of the Lumbardhi riverbed. | Photo: Atdhe Mulla

Just a few kilometers from Peja’s busy bazaar, Nallbani, a 60-something-year-old dental technician and nature-enthusiast, has built a small oasis he refers to as “Hotel Relax” by collecting tree branches, stones and discarded furniture pieces along the river.

“I wanted to create a place where people could come and feel the beauty of nature,” Nallbani told me, showing me the place he has built in the past four years and where he stays during his summer holidays. There are various chairs and tables, some tents that can be rented for the night, a fireplace and also a basketball hoop in the middle of the river’s bed. “Hotel Relax” is a small oasis where tents can be rented for the night, a short drive away from Peja’s city center. | Photo: Atdhe Mulla

On the rocks across the river, a picture of the statue of liberty and a graffiti portrait of Nallbani himself made by a foreign visitor are only some of the many humorous decorations.

When I asked why he had chosen this particular place, he simply looked up at the wooded mountains surrounding us.

“Once, there were no restaurants here, but it is still beautiful,” Nallbani noted, adding that he started running and biking up these slopes when he was a teenager and continues to go on biking adventures.

In recent years, tourism facilities and agencies offering trekking, skiing, rock climbing, spelunking and more have sprung up like mushrooms across the Rugova mountains.

The region’s untouched wilderness and authentic hospitality attracts adventuring spirits from Kosovo and abroad. Uta Ibrahimi, who became the first Albanian woman to reach Mt. Everest earlier this year and owns an agency for hiking tours, is a regular of these mountains. “I have had visitors from many different places and people keep coming back,” Nallbani said while showing me memorabilia of past guests. Anything from a bike computer left behind by two Bulgarian tourists to an Italian humanitarian aid worker’s business card.

As we chatted, every few minutes we heard shrieks of excitement from someone flying along the zip line not far above our heads.

“Everybody likes it here,” commented Nallbani. I could not agree more.

The depressing truth: No bright future for Western Balkans for decades to come

by Igor Zlatojev
Next: Opinion

A test for political parties before local elections