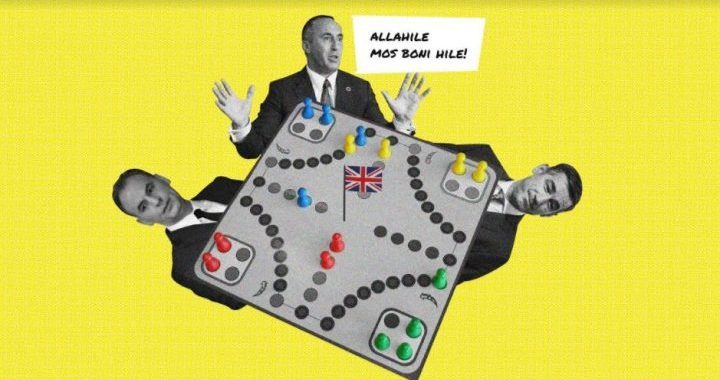 "For god's sake don't cheat!" | Illustration by Trembelat for PI.

The political ties of Kosovo’s new Telecom board

BIRN discovered that four newly-appointed Kosovo Telecom board members have friendly relations or past political ties with governing parties.

Of the six  members of the Kosovo Telecom board appointed on Thursday, four have friendly relations or past political ties with governing parties. The Kosovo Telecom had no board since 2016, when the last board’s mandate expired.

Their selection was made under the supervision of a British vetters, in charge of monitoring the recruitment process.

But, although the Kosovo government has signed a memorandum of understanding for cooperation with the Brits, BIRN found that Haradinaj’s cabinet did not take into account the recommendations by the British vetters.

According to British vetters hired by the UK embassy in Kosovo, only three of the new members of the Telecom board received sufficient points to reach the final stage of the selection process. Still, the selected three were not at the top of the list.

A list of proposed candidates was  issued by a commission formed by the government cabinet. Initially it proposed 12 names,  but six more were added inexplicably on the day the board was appointed.

BIRN requested an explanation from Prime Minister Ramush Haradinaj regarding the additions to the final stage, but he said that he only received six names.

The deputy prime minister’s friend with the least points

Skender Hoti, one of the appointed members, was neither on the initial selection list compiled by the government’s commission nor on the list of recommendations by the British embassy in Kosovo.

Hoti was not part of the initial list issued by the governmental commission, but after it was ‘expanded’ to 18 names, his name was at the bottom with the least points. He nevertheless managed to be appointed as board member.

Hoti, who denies having ties to NISMA, fought side by side with Deputy Prime Minister and party president Fatmir Limaj under the Kosovo Liberation Army, KLA, during the Kosovo war. Hoti was also a witness in the Bellanica case. He told BIRN that he shares friendship with Limaj, but he denied being part of his party.

“Yes, I testified in the Bellanica case. I know [Limaj], all of those who fought are my war pals,” he told BIRN. Photos of Hoti posing with Limaj and other members of NISMA can be easily found on Facebook — they were posted by Demir Limaj, Fatmir Limaj’s brother.

Hoti said that this is the first time he applied to be a board member, but said he is qualified.

“I have been working at the Post and Telecom for seven years, I have experience,” he said.

The wife of the AAK MP

Besa Shatri Berisha is married to Beke Berisha, a current MP of  the Alliance for the Future of Kosovo, AAK. She was on the final lists of both the government’s commission and the British vetting company, as one of the candidates with most points. Based on the points she received during the recruitment process, she was the first on the government’s list and the fourth on the British list.

Shatri Berisha maintains that her husband’s position did not impact the selection. She said that she applied for board membership in a previous call for applications, when the Democratic League of Kosovo, LDK, and the Democratic Party of Kosovo, PDK, were in the government. At the time, she was not selected.

“The only reason I applied [this time around] was because the British were involved in the process, otherwise I would not have applied,” she said.

Shatri Berisha said that if the board was voted by the assembly, where her husband works as an MP, it would be a conflict of interest, but since this is a government competency it does not pose a conflict.

“I found out [that I was appointed] through the media, I do not have an official notification. It is the second time I applied, the first time I was at the top of the list, but now I am not sure but I saw on the media that I am the second,” Shatri Berisha told BIRN.

Shatri Berisha has been an accounting manager at the Kosovo Energy Corporation for 10 years. She also works part-time at a company called Audit Conto and as a financial advisor for a local NGO called KRCT. She said that she would not withdraw from any position and maintain all of her current jobs.

“My resignation was not a criterion, all three of my jobs are long term for me. I can deal with all of them,” said Shatri Berisha, who according to her husband’s declaration of wealth at the Anti-Corruption Agency of Kosovo, has an annual income of 71,120 euros.

Sead Ujkani, another appointed member of the Telecom board, is a friend of PDK MP Mergim Lushtaku, son of former mayor of Skenderaj Sami Lushtaku.

BIRN contacted Ujkani, who conceded that he is friends with Lushtaku. But, he said that he did not influence his appointment to the board.

“I confirm that we have known each other since undergraduate studies and we still share a friendly rapport with reciprocal respect, but our work is separate and I also confirm that this process is separate from our rapport,” he said.

BIRN contacted Lushtaku multiple times, but he did not respond to requests for comment.

Ujkani said that he is the only candidate with specific expertise in accounting and auditing.

“I consider that such support from the British supervisors came based on my PhD in accounting and auditing at the University of Prishtina and Staffordshire University in the United Kingdom, being the only candidate with this specific background,” he said.

Currently, he is an assistant professor at the Department of Economics at the University of Prishtina and head of the Board of Buses in Mitrovica.

AAK’s consolidation in the Telecom board

Fidel Krasniqi, another appointed member of the board, worked for AAK in 2013 as an expert according to a Facebook post by the party.

He told BIRN that he was an external consultant for AAK when Besnik Tahiri, the current national coordinator for state reforms and member of AAK’s presidency, ran for mayor of Prishtina.

“I worked with Besnik’s campaign as an external expert in 2013. I didn’t engage in politics anymore, I did not join AAK,” he told BIRN.

But, in 2014, Krasniqi shared photos of Daut Haradinaj and asked people to vote for AAK. He called his relation to AAK a personal matter.

“This is a personal question and I cannot answer, I have a liking for various political figures, it is personal,” he said.

Osman Ejupi, who was board member of the Kosovo Competition Authority, and Suzana Andjelkovic are the other two members who were appointed to the Telecom board. BIRN was unable to find any possible political ties to their appointment.