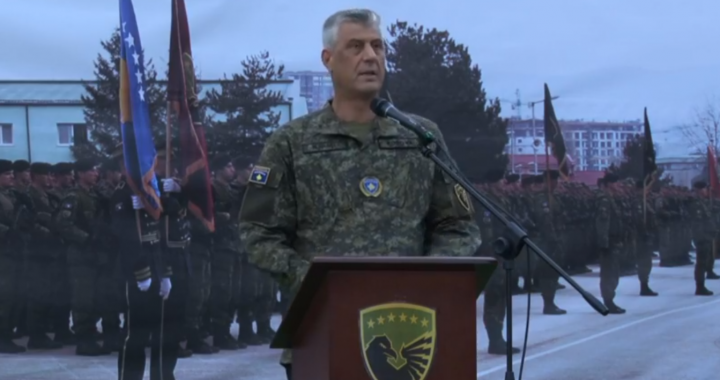 President Thaci back to uniform

Clad in his military best, Kosovo’s president has broken his silence on the eve of tomorrow’s vote at the Kosovo Assembly, congratulating the KSF on the expansion of their mandate.

In what has been described as an “inspection” of soldiers at the Adem Jashari military base in Prishtina on Thursday, Kosovo’s president has surprised many. Thaci used the opportunity to address members of the Kosovo Security Forces, KSF, congratulating the soldiers on their new mandate, even though the vote at the assembly, which would expand the competences in line with a regular army, will not take place until tomorrow.

“Dear soldiers of Kosovo, this month you, the best women and men of the nation, will have a new mandate, a new mission… you are the army of Kosovo,” he said. “You will serve and defend with pride the independence and territorial integrity of the Republic of Kosovo.”

In recent days, the issue of the transformation of the KSF into a regular army has created an atmosphere of exaltation among Kosovars, creating the perfect momentum for politicians to parade the decision in front of the public in order to mask other failures.

However, for Kosovar politicians like Thaci, it doesn’t matter that the entire process of transformation will take between seven and ten years, and would need backing from NATO member states, which for now has no consensus within the international military alliance organization, and whose members have expressed reluctance on the idea of expansion without express consent from Serb deputies of the Assembly.

These worries are valid, having in mind the international delegitimization of Kosovo’s sovereignty this year with the failure to join Interpol, a key international law enforcement organization.

Nevertheless, Thaci knows how important is to make the army his silver bullet. Earning him the nom de guerre “The Snake,” Thaci’s political career was jumpstarted as the head of Kosovo Liberation Army’s political wing.

Even if plagued by a short memory, one would remember that two months ago, Kosovo’s ‘Supreme Commander’ said that he was “uninformed” about the government’s plans to expand the competences of the KSF, and condemned the action of the Government of Kosovo.

“I think that proceeding with the issue today is the wrong moment, because we do not need to send such a message to our allies,” Thaci warned the Kosovo government in September.

Nonetheless, two months later, in keeping with military junta style, Kosovo’s president took the stage to address to KSF members, and the reason is obvious — he is taking advantage of this political momentum, and using the exaltation of Kosovo citizens that comes from such a long lasting blockade of the transformation of KSF to a regular army for his own gain.

After congratulating KSF on its successes since its establishment, Thaci’s speech called on the soldiers to guard with pride the “sovereignty” and integrity of Kosovo.

Even without cynicism, one could ask, what sovereignty and territorial integrity is the supreme commander referring to?

Was it not the president who, alone with Serbian president Aleksandar Vucic, has promoted ideas about “border correction,” a term used as a euphemism for land swaps between the two countries?

Haphazardly, the individual who personally called for breaches to the sovereignty of Kosovo yesterday is calling for protection of its borders by Kosovo’s soldiers today.

The political memory in Kosovo is short, and it has to be when politicians are able to do a u-turn and change their stance within a matter of weeks.

Considering Thaci’s political history, none should be surprised, and we can envisage Thaci’s plan to use this army in the future as an alibi for tension in the North and to fulfill his plans of “border correction” with Serbia.

Thursday’s spectacle saw the snake laying his traces in the sand. Thaci’s appearance was a demonstration of the cunning politician, one who will always find a way to capitalize on any opportunity to score political points, and do it before the points have even been scored yet.