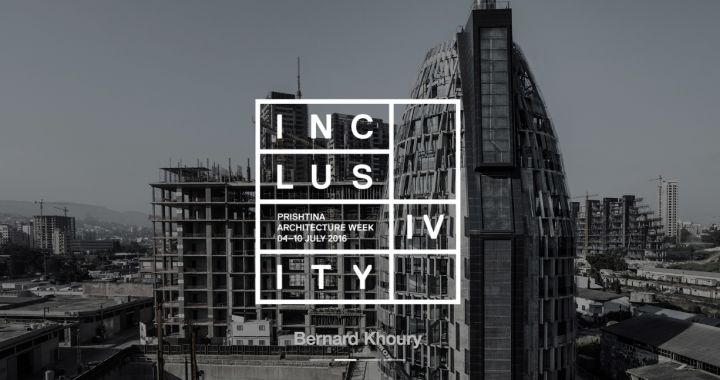 Lectures, workshops, and film screenings will be held every day between July 4 -19 in various locations in Prishtina.

The Kosovo Architecture Foundation in partnership with the Municipality of Prishtina and the Future Architecture Platform has opened the fourth annual Prishtina Architecture Week, PAW, with ‘Inclusivity’ as this year’s theme.

The event was kicked off on Monday night with a lecture by Martino Stierli at the American School of Kosova, ASK. Stierli, who is the Philip Johnson Chief Curator of Architecture and Design at the Museum of Modern Art, is one of two key speakers among a number of renowned architects who have traveled to Prishtina for the week’s events.

“We are very lucky to have some legends of architecture here this year,” said Bekim Ramku, the the director of PAW. “Martino Stierli and Bernard Khoury are some of the most interesting in the game, and it is inspiring for young people to hear from well known architects about how they started.”

Khoury, who studied architecture at the Rhode Island School of Design and received a Master’s from Harvard in Architectural Studies will speak at 9 p.m. tonight at ASK.

PAW was founded in early 2012 in an effort to bring well-known architects to Prishtina.

“We invited a famous architect from the Netherlands to give a small lecture to students,” explained Ramku. “We held it in the smallest lecture hall, because we were anticipating a small turn out, but over 300 people came. People were standing outside trying to listen.”

The program grew from there.

The past three editions of Prishtina Architecture Week have seen turnouts amounting to over 15,000 people traveling from both near and far for the lectures, workshops, exhibitions, screenings, and competitions that take place throughout the week.

“This year we are expecting around 5,000 participants,” Ramku said.

While the weeklong lecture series closes on Thursday night followed by a reception, open studios, screenings, workshops, and tours will continue until July 19. The workshops, to be held by several local creatives, will discuss topics that range from the influence of architecture on fashion to architecture for refugees. Many of these will take place in the Innovation Center of Kosovo. Everything is free and open to the public, and all are invited to attend.

“Seeing how the workshops and lectures resonate with the students and inspire their work is the best part of the week,” said Ramku. “And everyone who comes has a good time.”