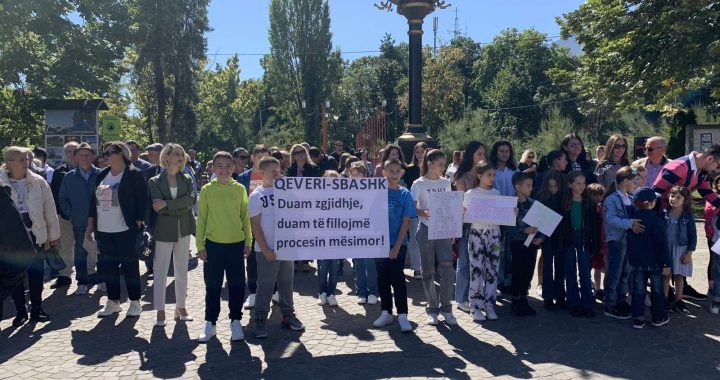 In the third week of a strike in education, pupils and parents marched in Peja against the delay in starting classes.

Pupils who should have been sitting at their school desks for lessons at 12 midday on Monday in Peja were instead holding banners demanding the restart of the teaching process in schools.

With the motto “Government, Education Union – We want a solution, we want to start the learning process”, pupils and parents marched in Peja against the school strike, as Kosovo entered the third week of a strike in the education sector, which is leaving about 320,000 pupils out of school.

Arta Kollçaku-Gashi, head of the Parents’ Council at the march, demanded that the strike in education stop and classes start. According to her, in the battle between the government and the Teachers Union, pupils should not have to suffer.

“Children should have their place in school, not at home, and let’s not risk children by taking them out on the street for the purposes of the two parties, for the purposes of the government and the Education Union. I appeal to the government and the Teachers Union to make a decision as soon as possible and take the children out of this battlefield,” Kollçaku-Gashi said during the march.

During the march, Hazir Tigani, from the Parents’ Council, asked the Education Union to open the school doors for pupils tomorrow.

“The Education Union as early as tomorrow needs to open the doors for pupils, but I think that even tomorrow is too late for them to sit down today and settle the disputes. Because in the end we are the biggest losers,”  he said.

The union is insisting that the teachers will continue with strikes until their demand for an additional 100 euros per month is met, until the Law on Wages comes into force.

This is opposed by the government, which wants schools reopened now, promising that the new Law on Wages, that foresees an increase in salaries for teachers, will be approved soon.

The 2022/23 school year for primary and secondary schools was scheduled to begin on September 1. The public-sector strike started on August 25.