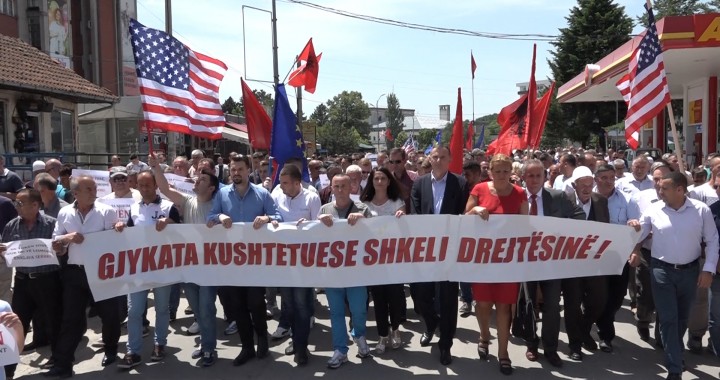 After years of legal dispute over a piece of land donated to the Decani Monastery in 1997, a Constitutional Court decision in favor of the church sparks new protests.

Hundreds of Decani residents marched in the center of the small Kosovo town of Decan to protest a decision of the Constitutional Court which recognizes the Decani Monastery right of ownership to a disputed piece of land.

The Court’s decision taken on May 21, 2016 concluded that previous decisions related to the 24 hectares of disputed land, which formerly belonged to two private companies, violated both the Constitution and the European Convention for Human Rights.

The 24 hectares of land have been claimed by the two socially owned companies Apiko and Iliria since 2000. The land was donated by the Serbian government to the Monastery in 1997, a donation which the companies claimed was illegal because Kosovo Albanians were being oppressed at the time by the Serbian Government.

Two decisions taken by the Supreme Court in 2015 concluded that the property should be administered by the Kosovo Privatization Agency. Afterwards, Father Sava Janjic, the Monastery’s prior, appealed the court decision by sending it to the Constitutional Court. The Court found the decisions to be unconstitutional, affirming that the land belonged to the Monastery.

The mayor of Decan, Rasim Selmanaj, called upon Decan’s citizens to protest against the Court’s decision.

“We don’t want them to intervene and influence the municipality’s interests with this absurd decision,” said Selmanaj in the second protest since the Court’s decision, claiming that the decision was a political one. The Decani Monastery is one of the holiest Serb Orthodox sites in Kosovo.

During the protest, Selmanaj also urged Father Sava Janjic to give up on this endowment, which he says was donated to father Sava by Milosevic. As Selmanaj addressed the crowd, protesters carried banners saying “Constitutional court violates justice.”

“With these protests we want to express our citizen dissatisfaction. This is a pressure we want to put on the Court, because this decision will influence Decan’s economy,” said Time Kadriaj, an MP of the opposition party Alliance for the Future of Kosovo, AAK.

“Decan does not have lands to give away,” Kadriaj concluded.

Selmanaj also promised that the protests, which began to May 26, would not stop until the matter was settled in their favor. The town’s mayor has refused to implement the Constitutional Court’s decisions so far, and declared that he would resign before doing so.

“I will not implement it, because it is against the law and justice. We do not want to get to difficult situations in Decan, but if this continues, it is not even logical for me to be a mayor – we need to have our say,” he concluded.

One of the many protesters rallying around Selmanaj agreed.

“These were never church properties, but our properties,” he said. “We will not stop protesting until the end.”