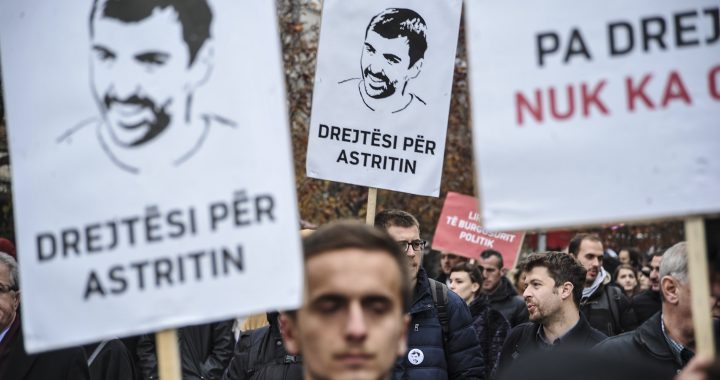 On resigning as a moral act

What pushes an individual to maintain a public office against multiple failures and scandals that accompany their work?

The death of the political activist Astrit Dehari on November 5, 2016 in the detention center in Prizren and the way that this case is being managed shows once again that state officials in Kosovo have not been introduced to the act of resigning as a moral act.

Twenty-six year-old Dehari was held in prison for 68 days without being indicted, during which he was not interviewed once, and even that is not a sufficient reason for the prosecutor to offer his resignation. Dehari died in an institution that is managed by the Ministry of Justice, but even after three weeks, Minister Dhurata Hoxha does not think it reasonable to resign. The Kosovo Police misinformed the public with regards to the cause of death, but the Interior Minister Skender Hyseni did not think it was reasonable at all to give even the smallest explanation about the false statement of the police, let alone to resign.

In a democratic liberal system of government, a public office is limited by laws and ethical codes. In contrast to authoritarian systems, in which public officials are accountable only to the state leader, in democratic systems accountability is multi-dimensional.

Nowhere has the law ever served as a sufficient guideline to how one should exercise their public duties. In most cases, in practice the public office is exercised in a middleground between what is considered legal and illegal. It is exactly because of this middle ground that ethical codes exist to serve as guidance to those who carry the responsibility of public service and to indicate how to act in cases of moral dilemma while on duty.

The public sector in Kosovo is characterized by many ethical violations, a high level of corruption, a lack of accountability, various abuses of public posts, and an incompetence in completing the most basic jobs. Nevertheless, during these 16 years of self-government, the number of state officials that have resigned from a public post can be counted on one hand.

Moral responsibility in exercising a public duty, especially when that is a managerial position, means that one takes responsibility not only for actions, but also inactions. Moral responsibility means being held responsible for actions and inactions of your subordinates which are under your management, and not only the direct actions of the official in the managerial role. Furthermore, a resignation should be offered even in cases when the policies of the department or government one serves contradict the moral principles one upholds as an individual.

Patrick Dobel, a professor of the Evans School, in his essay “The Ethics of Resigning” lists three main categories of reasons for resigning: personal conviction, official responsibilities, and effectiveness. According to Dobel, a public official should resign in the case when he/she notices that the enthusiasm for exercising that public function has decreased. Official responsibility covers all those reasons for resigning that are related to the unfulfilment of  promises or obligations of the office. A public official needs to resign even in cases when his/her personal abilities are not sufficient for the fulfilment of the obligations of the office he/she holds. According to Dobel, one should also resign when one is not effective due to the impossibility of garnering political and public support, even if one is professional apt and has ethical integrity.

After 50 years of public service, the Defense Secretary George C. Marshall offered his resignation to President Truman, justifying it with being “exhausted” by his public office. In 1995 American senator Sam Nunn decided to not run for a guaranteed seat, mentioning the lack of enthusiasm as a reason to leave public service.

During the wars in the former Yugoslavia, between 1992-1993, three high officials of the State Department responsible for Serbia (George Kenney), Bosnia (Marshall Harris) and Croatia (Stephen Walker) resigned, giving the reason that America’s decision not to intervene in Bosnia was against their moral principles. These three officials resigned from their positions although they were thousands of miles away from the wars in former Yugoslavia.

The reasons for resigning can also be completely unrelated to the public office itself. In 1967, after the media reveleaed that John Fedders had physically abused his wife, the American finance official was forced to resign, leaving a successful career in finance behind.

In Kosovo, every time the moral resignation of a public official is requested, one is reminded of the example of Fatmir Rexhepi, the former Minster of Internal Affairs and a current MP in the Kosovo Assembly. On February 10, 2007, during a Vetevendosje protest, two civilians were killed and many more wounded with rubber bullets used by UNMIK police. After the events, minister Rexhepi resigned from his office, although the UNMIK police were not even in his chain of command.

“I cannot exercise an office which holds the responsibility of protecting public order, while the competences of this responsibility belong to a different institution,” he said as he tendered his resignation. To this day his remains the most meaningful resignation in the history of Kosovar institutions.

The most recent resignation was that of the Director of the Construction Inspectorate in the Prishtina Municipality, Xhelal Svecla, who resigned after two young children lost their lives by falling in an open pit at a construction site. This resignation falls under the category of resignations due to the lack of action in the exercise of public office, as well as according to the professor Dobel, a resignation with the purpose of protecting the integrity of the institution and the highest official in the hieararchy, in this case the Mayor Shpend Ahmeti.

Agani resigned after being indicted of abuse of office while he was Minister of Health. As Minister of Health, Agani issued an administrative instruction allowing public hospital patients to be transferred to private clinics in case treatment in the former was impossible. The instruction also foresaw that 70 per cent of costs in emergency cases could be covered by the Ministry in such cases. The decision paved the path for abuse with public money: 64 people, including doctors and nurses, have been indicted for corruption and abuse of office. Hundreds of patients were referred by doctors in the public sector to specific private clinics, while illegally the Ministry of Health covered 100 per cent of the expenses.

Yet, Agani considers the prosecution’s indictment as a political war against him, and not as a result of wrong decisionmaking.

Meanwhile, there are dozens of officials in Kosovo’s public administation whose health makes it impossible for them to fulfill the duties of their office with responsibility. Scores of other public officials are unable to exercise their duties. Many others continue to hold office although they have been implicated in a myriad of scandals, accused of abuse of office and even declared guilty by courts on such accusations.

A large number of public officials in the Prizren municipality continue to work even after multiple ethical and legal violations, from those responsible for the Historic Center, due to whose negligence a three year old girl lost her life after an old house, which should have been under institutional care, collapsed, all the way to the many abuses in the education and construction sectors. Not only do they not resign, but these officials cannot even be fired – their own boss, the Mayor of Prizren, continues to govern even though he has been declared guilty of abuse of office by a local court.

Although officials of the Ministry of Internal Affairs caused damages of up to five million euros to the Kosovo budget, nobody took the moral responsibility to resign. No one in the Ministry of Economic Development resigned, although they managed two failed processes of the privatization of the Kosovo Post and Telecom, causing a loss of millions of euros in the process. For 16 years no one resigned for mismanagement of the Ministry of Health, a sector which lacks essential medicines, while over 80 per cent of cardiologists are being accused of corruption.

Resignation cannot be regulated by laws. Resigning is a moral obligation of each individual, an act which needs be done every time that the exercise of public office is impossible because of health complications, lack of motivations, professional limitations, the lack of fulfilment of obligations and promises, the low effectivity at work, or accountability for the action or inaction of the entire department one leads.

What pushes an individual to continue holding a public office against multiple failures and scandals that accompany their work? In a country with limited opportunities for employment, financial security is one of the main actors that pushes public servants to hold on to their office, regardless of the results of their wor. A government that offers you a managerial post in the public sector is another reason why so many fight with all means to maintain their posts. The title of a minister or a director gives one power over society, family, police, courts, hospitals, and schools.

For so many, the race for high public office is simply a race to fill their resume with the most attractive job titles. This is perhaps why the public administration contains thousands of “high posts” starting with the title “high official for photocopying,” and all the way to six posts for deputy ministers. Running after the enrichment of resumes, these officials have impoverished their character.

Resignining should  not be considered an act of weakness, but as an ethical action which manifests the nature of public servants in inglorious events that happen while governing. In order for citizens to regain their trust in the state administration, today more than ever, we need public servants who are both able and have character. And we need the others to resign.