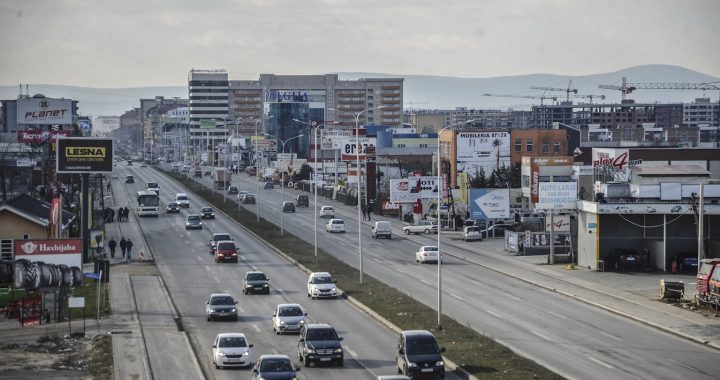 Thousands of businesses have built illegal premises on state-owned land or taken over public companies’ property since the Kosovo war, but experts argue that new legislation to tackle the problem should not amnesty wrongdoers.

Lesna LLC occupies a commercially-attractive position on the thoroughfare that runs between Pristina and Fushe Kosove, one of the busiest streets in the country.

But the private company pays just 480 euros a month in rent for one hectare and 27 acres of what is described in its rental contract with the Kosovo Privatization Agency and in cadastral registers as publicly-owned ‘agricultural land’ – despite the fact that for the past 17 years, Lesna LLC has been manufacturing doors and windows.

Lesna has put up several buildings on the so-called agricultural land, which are used as mini-factories for producing windows; on its website, the company boasts that it is “the largest door and window manufacturing plant in the region.”

But Lesna isn’t the only firm which has constructed private commercial premises on plots of land that are officially listed as the assets of public enterprises in Kosovo.

In the same street, according to a Kosovo Privatization Agency report on rented properties, several other companies have rented land below the market rate in this industrial area to use for their businesses.

N.T. Bercom, for instance, pays a monthly rent of 328 euros for 19 acres of agricultural land, while the company Moderne LLC pays 120 euros a month for 10 acres and N.P. Metal pays 305 euros for one hectare.

According to the Prishtina municipality, building on socially-owned land is illegal, as the first condition for obtaining a building permit is ownership.

Based on the current legislation, all these companies’ buildings could be knocked down.

“If the law doesn’t get changed, such buildings on public enterprises’ land will be demolished,” Prishtina municipality spokesperson Erzen Vraniqi told BIRN.

Over the past 17 years since the war in Kosovo ended, many successful businesses have been developed as the result of illegal takeovers of publicly-owned buildings and agricultural land.

But as Vraniqi pointed out, the law could soon be changed to allow company owners to legalize the illicit constructions they have built on publicly-owned land and profited from during these years.

Up to now, however, the state has let people who took over publicly-owned buildings and land to get away with it.

The bodies officially responsible for preventing this – initially the UN mission in Kosovo, UNMIK, then the Kosovo Trust Agency, KTA and its successor, the Kosovo Privatization Agency, KPA – have all tolerated such illegal activities, and haven’t taken any measures to sanction them.

Economics journalist Ibrahim Rexhepi, who has followed the privatization process since the war, said that the KTA and the KPA were responsible for allowing the situation to continue.

“If they don’t act in this direction, other institutions such as judiciary or the police can’t act. They can’t do anything,” said Rexhepi.

By the end of 2015, the KPA had even signed a total of 460 contracts with people who had taken over the property of socially-owned enterprises, turning them into tenants, as well as renting out publicly-owned agricultural land on which businesses had illegally constructed their premises.

The KPA says that so far, some 2,500 illegal buildings on public enterprises’ land have been identified.

“Most of these illegal buildings are in the Prishtina and Prizren regions,” the KPA’s spokesperson, Veton Hajdini, told BIRN.

The Law for Treatment of Constructions without Permit says that such buildings on public property must be demolished.

But the government is now in the process of writing a new law governing how to deal with illegal buildings, aimed at ensuring that anyone who has illicitly taken over public property can legalise their unlawful constructions.

The new law will include “provisions that regulate cases in which a building without a permit was built on public property, national parks or other special areas,” according to the draft legislation, which was published on the prime minister’s website.

It says that the authorities can “authorize the use of certain land to avoid automatic demolition,” meaning that the owners of illegal buildings could receive permits and not have to see their business premises knocked down.

After the law was drafted, the head of the KPA’s board, Petrit Gashi, met Prime Minister Isa Mustafa and – for the first time since Kosovo declared independence – asked for help from officials to deal with illegal buildings on public property.

The KPA says it has approved the draft legislation, but has not published the document on its own website, and did not provide a copy to BIRN when asked.

The KPA has also established a commission to review illegal buildings on public enterprises’ property; its existence is mentioned on the KPA’s webpage, but there is no information about its composition and its activities.

According to Hajdini, the commission will review cases that are considered as obstacles to effective privatizations, and is able to recommend that people who have constructed illegal buildings become privileged buyers of the land plots on which they are built.

The sale of these properties can be done without a tender and without making any comparison between the sale price and market rates – although Hajdini insisted that this did not mean that plots would necessarily be sold off cheaply to the people who illegally built on them.

“The value of the asset is set by independent and licensed evaluators of property who, with their expertise, provide a potential price which is envisaged according to the asset’s circulation value,” he said.

However he admitted that the KPA is aware that it can’t demolish buildings where family businesses have been built up, because it would spark resistance from the municipal authorities, the police or the business owners themselves.

“So the fact that a building built on the land of some public enterprise exists doesn’t automatically mean that it will be demolished,” he explained.

He said that under the existing law, a building can be demolished only if there has been a preliminary analysis of the situation and a decision has been made by the relevant state authority, or in certain cases, if a verdict has been handed down by the relevant court.

He also said that people should be able to buy the properties under procedures set down by Kosovo’s current law on ownership and other property rights.

“A person who in good faith has used a property or a part of it for more than 20 years, can gain ownership,” Article 40 of the law says.

However it is still unclear whether the KPA will allow people who have taken over public property or rented it to use this article to buy it without allowing other potential buyers to make offers in a competitive tender.

The state is looking for a way to regulate all the illegal building that has been done in Kosovo in the 17 years since the war, in a way that benefits the country’s economy in the long term and causes the least disruption to existing businesses.

Valdet Osmani, the former head of Kosovo Architects’ Association, told BIRN that he believes that changing the law so people can legally register illegally-built properties – including those constructed on socially-owned land – would have a positive impact.

Osmani argued however that people who have taken over socially-owned property should pay 30 per cent more than the market value.

He also said that urban planning regulations had “destroyed/degraded cities, but also stimulated illegal building,” and should be overhauled.

“There should be a wide-ranging and professional investigation into urban development and regulation plans,” he said.

Economics journalist Rexhepi insisted that tolerating or endorsing land takeovers and illegal buildings on socially-owned land showed that the state was dysfunctional and that the rule of law could not be implemented.

Rexhepi claimed that this has also damaged the privatization process, because there have been many instances in which investors weren’t allowed access to a property that they had bought from KPA because it had already been taken over by someone else.

“A huge mistake would be made if they amnesty the takeovers and if they legalise buildings that have been built on socially-owned property,” he argued.

“That means ‘take something over, and then the state will amnesty you’,” he said.