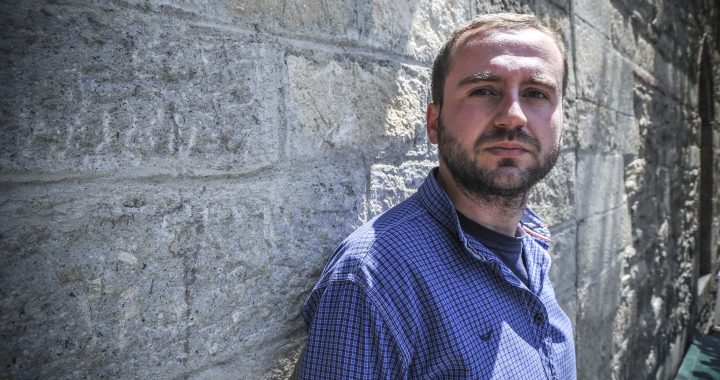 Syria returnee seeks to prevent others from becoming violent extremists

A Kosovar who has gone to Syria and back seeks to prevent others from following in his footsteps to war and criticizes the government’s approach to returnees.

Albert Berisha spent two weeks in Syria in October 2013. He says he went to join the Free Syrian Army in its crusade against Syrian strongman Bashar al-Assad and wound up meeting the likes of Lavdrim Muhaxheri, by now an infamous ISIS commander. But he told Prishtina Insight that he quickly realized the fighters he had found himself with did not share his goals and

he wanted to leave before he would be forced to commit crimes with the likes of jihadist groups such as ISIS and Al Nusra. Berisha returned to the Balkans and finished his Master’s degree in international relations — with a thesis debunking Samuel Huntington’s Clash of Civilizations in the context of Albanians– before being indicted for terrorism by the Kosovo prosecution.

In a wide ranging interview with Prishtina Insight, Berisha explained his motivation for traveling to Syria, and what has happened to him since he returned, including being tried and convicted of terrorism. He also spoke about his new NGO, INSID, comprised of himself and other Kosovars who returned from Syria, saying they have the moral authority to prevent others from traveling to Syria.

Berisha said he felt powerless to create positive change in Kosovo, where connections are important for employment.

“You had to know someone or be part of a political party to have a job or be part of political life and it was very hard to find myself in Kosovo. I didn’t have anything else to do,” he said.

“I didn’t see that i could be useful in Kosovo at the time, nor in Albania, and I wanted to help someone else, someone who was in trouble. So I made the decision to fight for the Syrian opposition against the Assad regime.”

Berisha said that the religious beliefs he found among his fellow Albanians in Syria shocked him.

“It was a big surprise how they think about Kosovo and about other Muslims,” he said. “The majority were Takfiris…they think that Kosovo is a state with a non-Islamic system, so it is not ‘our state.’ They want to have a state according to Islamic values, according to Islamic law. It is much better to live, according to them, in the Islamic state than in Kosovo, which is a secular state.”

Berisha has been critical of the Kosovo government’s approach to returned fighters, saying that without proper re-integration into society, disciplinary measures could have counterproductive outcomes.

“You cannot just put people in prison because then you will radicalize them more and more and you will have radicals inside and outside prison and the phenomena of extremism will only increase. Our government has to give a second alternative, which is soft power, which means to help us, to help civil society, to help media and Imams to prevent these ideas and to help people become a useful part of society.”

According to the Kosovo Prosecution, some 316 Kosovo citizens, including women and children have gone to conflict zones in Syria and Iraq. Some have returned and 146 have been arrested on terrorism-related charges, which includes not only fighting but also recruiting and abetting terrorism. Of these, 86 have been indicted and 46 found guilty in the first or second instance, receiving a total of 187 years. No one who has been indicted so far has been found innocent.

Berisha himself received three and a half years imprisonment but remains at liberty while he waits for a final verdict from the court of appeals.