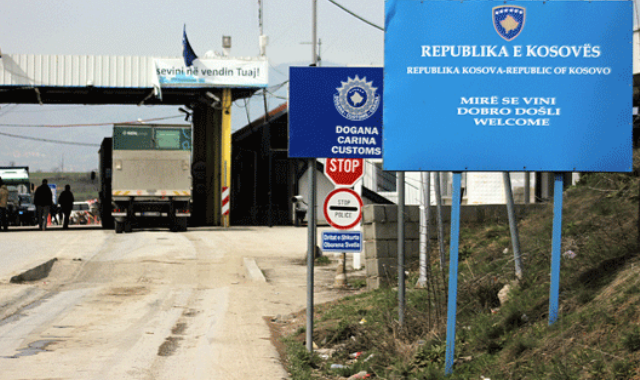 Crossing point between Serbia and Kosovo. Photo: Archives of BIRN.

After refusing to let her into Kosovo at the weekend as a suspected spy, the Interior Ministry has declared Daria Aslamova persona non grata for five years.

The Russian embassy in Belgrade confirmed on Sunday that Russian journalist Daria Aslamova “is safe and located in central Serbia” after she was detained a day earlier while trying to cross the border from Serbia into Kosovo. The embassy claimed her detention was groundless.

Kosovo Interior Minister Xhelal Svecla on Sunday banned the entry of Aslamova as a “confirmed spy”.

“Daria Asimilova, a confirmed Russian spy, engaged in war propaganda in Ukraine, was arrested attempting to enter Kosovo from Serbia,” Svecla wrote on Twitter on Sunday, one day after Aslamova’s arrest.

He added that this occurred on the same day as the police were attacked by criminal gangs and “only six days after Sunday’s incidents” when Kosovo Serbs erected barricades against government measures on license plates and IDs.

Svecla described Aslamova’s attempt to enter Kosovo as “irrefutable proof of Russian interference in the north of Kosovo”.

Svecla announced on Sunday that Aslamova had been declared persona non grata, prohibiting her entrance for the next five years.

Aslamova, 52, is a journalist for the pro-Kremlin media outlet Komsomolskaya Pravda. She has also been a war correspondent in Ukraine for TV channel Tsargrad, known for spreading Russian propaganda.

She has also been a war journalist in  Chechnya, Abkhazia, Nagorno-Karabakh, Ossetia, Tajikistan and the former Yugoslavia.

Radio Free Europe reported that Aslamova was in Kosovo to cover the situation in the Serb-dominated north of Kosovo after locals put up barricades to block roads to two border crossings with Serbia on July 31.

After being questioned by the Kosovo police, Aslamova went back to Serbia.

RIA Novosti media cited Aslamova saying that “I arrived at the border at four in the morning. Serbian border guards also questioned me. They realized that there was no deportation mark”.

“On the night of August 7, the Kosovo authorities released her after being taken into custody, after which she reached the border on her own by bus,” RIA Novosti reported.

The editor-in-chief of Komsomolska pravda Vladimir Sungorkin told RIA Novosti that she will continue to work in Serbia.

Kosovo leaders have expressed concern about what they consider a Russian campaign to destabilize the region.

On July 27, in a meeting with US Secretary of State Antony Blinken in Washington, Kosovo President Vjosa Osmani said that Russia’s campaign in the Balkan is beiong spread via its “satelite, Serbia”.

Kosovo security experts told the media over the weekend that both Serbian and Russian agents are present in the Serb-majority north of Kosovo.

According to Kosovo local media, Koha, Arben Hajrullahu, political science professor at University of Pristina, says that Russia has always had an interest in “using Serbia as a basis to realize its expansionist politics”.

Kosovo police were attacked on August 6, the day of Aslamova’s arrest, while they were in a routine patrol at the Ujman/Gazivoda lake in the Serb-majority north. Kosovo police have been attacked around 10 times in the north since last year.

Kosovo authorities have blamed criminal gangs in the north.