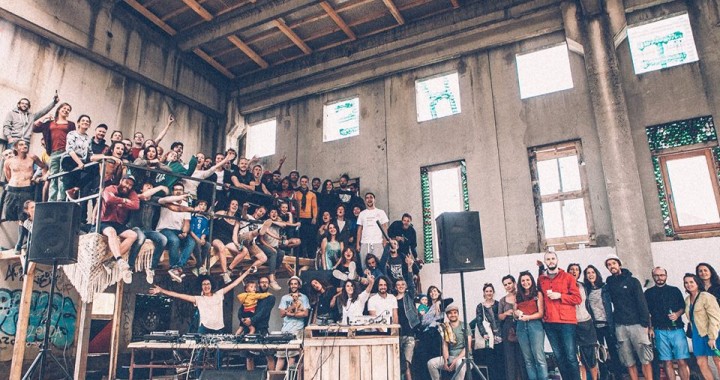 Termokiss: a warm kiss from Prishtina

A concrete structure in the city’s periphery has been transformed into a social center where the youth of Prishtina can feel the warm kiss of social life.

In a concrete mass that is now decorated with the inscription “Qendra Sociale” (the social center), young people have gathered and are discussing the fate of the unfinished building. During the last weeks they received help from dozens of volunteers, foreigners, and locals who transformed the concrete mass into a new space in service of the community.

Now Prishtina has a social center where its citizens can organize events with only one condition: they must not have commercial purposes.

With initiative from some young people from Prishtina Architecture Week and with help from Toestand vzw (Belgium) and InfoQuartier Mache (Switzerland), the social center Termokiss has become real and possible.

Termokiss is placed in a small parcel of land of the Prishtina Municipality, in a concrete unfinished structure that was built in 1997 from Termokos (the heating company of Prishtina). Its new name comes from a mixture of Termokos and Kismet (the initial name) with a spin at the end.

The initial building was meant to be the base for the central heating factory of the city.

It has never been finished as a project, but Njomza Dragusha, a construction engineer, together with some young artists and architects, had a clear project in mind. They imagined altering the space of the abandoned building into something new and useful, a social center.

Both the municipality and the heating company that owned the building were supportive towards the project. After some small bureaucratic challenges, the project Toestand Mache Prishtina, led by Dragusha and some other young people, started working to create a new space for the youth of Prishtina.

“On July 9, 27 volunteers from Belgium and 15 from Switzerland landed in Kosovo and constructed the roof of the building,” said Dragusha.

Inside the building there is a stage that can be used for artistic performances. A medieval style chandelier with candles, tied with chains on the five-meters-high roof, hangs in the middle of the building. Walls are painted with different motives and messages that raise warm feelings for guests.

“It has been a process full of love and commitment of the volunteers,” said Dragusha.

On July 16, the center had its official opening and many young people attended. There were performances from young artists as well.

A decrepit building is transformed into a new social hub

Temokiss’s former yard was a frightening place for the people of its neighborhood. It ended up being a place where drug addicts took their daily doses. “We have found about 80 injection needles during a cleaning up of that place,” said Arbër Hoti, one of the administrators of the social center.  “Now Termokiss isn’t anymore a place where you can find heroin,” he added.

He explained that the idea is to create a free space for the youth of Prishtina, something that according to him was missing in Prishtina. “New bands can use this place to perform, as well as new artists that don’t have a proper place to practice,” said Hoti.

Hoti clarified that in the beginning, he was skeptical about the project, which he believed seemed to be “too far fetched.” But he has changed his mind since the project’s initiation. He now sees the idea realized and has a deep connection to the space. “Each time I’m free, I go to the center. Somehow I have now an emotional bond to it,” Hoti said, smiling pensively.

The initiators were inspired by citizens that live nearby who supported the idea but also by institutions such as the Firemen of Prishtina. “The firemen were awesome. They lent us their ladder each time we asked for it without asking for any further explanation,” said Hoti.

Nonetheless, he is concerned about the small number of local volunteers that offered to help implement the main infrastructural changes to the center.

Arbër Salihu, a well-known and promising young musician from Prishtina who is involved in the Termokiss project, says that Termokiss brings together “the big multifunctional space that has a great potential to become a fantastic house for concerts and other activities,” as well the “willpower of young people to get together as a community.”

Salihu and the others involved with the project are trying to “inspire civic activism.” “It is not necessary to have a privileged political position to contribute positively in your city,” Salihu said.

Termokiss hosted one of its first public activities when it organized a movie night on the eve of August 26. In addition to artistic purposes, there were also humanitarian reasons for organizing the event. As people settled into various secondhand and handmade seats in the cozy Termokiss space, Dragusha made an announcement: the money collected from homemade lemonades, popcorn, and beers that were being sold will be given to a poor family in need of medical assistance.

A projector screen made of a white robe tied with rope lit up to show Shane Carruth’s “Upstream Color.”

Liridon Hoxha, a Kosovar master student of Biology in Konstanz, expressed his enthusiasm about the Termokiss activities. “For me it is a great joy that we had the possibility to host the movie and to gather all these open minded people together.”

He wants visitors to Kosovo to see the aspects of Kosovo society found at Termokiss. “There is no corruption, but there are creative young people, who with a good will and community work, use recycled materials to create marvelous places like Termokiss,” Hoxha said.