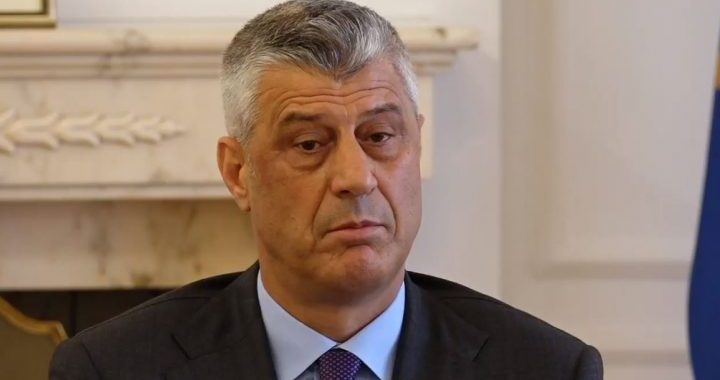 Following the announcement of the ten-count war crimes indictment at the Kosovo Specialist Chambers naming Hashim Thaci as a suspect, the Kosovo President has cancelled his trip to Washington DC to engage in negotiations with his Serbian counterpart, Aleksandar Vucic.

Richard Grenell, the US Special Envoy for the Kosovo-Serbia dialogue, announced on Twitter on Wednesday that Kosovo President Hashim Thaci has cancelled his trip to Washington DC, following the earlier announcement by the Kosovo Specialist Chambers that an indictment has been filed against him.

“I respect his decision not to attend the discussions until the legal issues of those allegations are settled,” Grenell stated. The envoy went on to state that the meeting, scheduled for Saturday June 27, would still take place, with Prime Minister Avdullah Hoti representing Kosovo and President Aleksander Vucic representing Serbia.

The Kosovo Specialist Chambers, KSC, announced earlier on Wednesday that an indictment had been filed in which Thaci, alongside PDK leader Kadri Veseli are accused of committing war crimes and crimes against humanity.

According to a press release issued on Wednesday afternoon by the KSC, the allegations contained in the indictment would hold Thaci and Veseli criminally responsible for nearly 100 murders. “The crimes alleged in the indictment involve hundreds of known victims of Kosovo Albanian, Serb, Roma, and other ethnicities and include political opponents,” it states.

The Kosovo Specialist Chambers and Specialist Prosecutor’s Office are part of the judicial system of Kosovo set up to try crimes against humanity, war crimes and other crimes which allegedly occurred between 1998 and 2000 on the territory of Kosovo. The Court was established by the Kosovo Assembly in August 2015 and has been ready to receive indictments since June 2017.

The indictment against Veseli and Thaci is yet to be approved, with a decision from a judge of the Court’s Pretrial Chamber confirming the charges laid out in the indictment still pending.