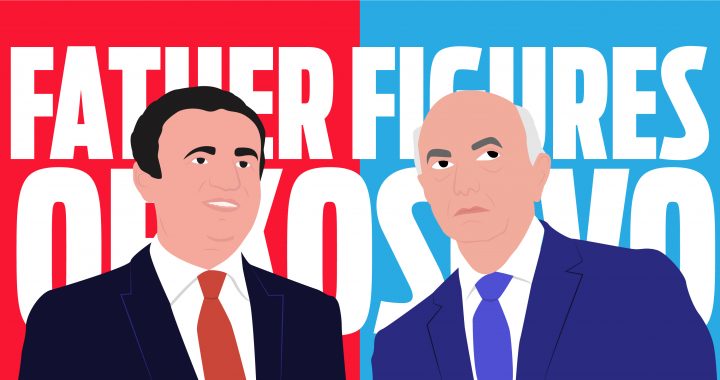 The unquestioned authority of patriarchal leaders extends far deeper into Kosovo’s political culture than one of the prime minister’s nicknames.

Former MP from the Democratic League of Kosovo, LDK, Gani Geci, who was sentenced to four years imprisonment for murder in 2016, recently spoke to the media about Kosovo’s ongoing political crisis.

Geci no longer holds any kind of official position within LDK, but spoke on behalf of his daughter, Marigona Geci, an MP at the Kosovo Assembly. “Marigona Geci and our family will never vote in favour of a coalition with PDK, and we stand by that,” he told journalists in front of the Assembly.

Geci’s total disregard for Marigona’s agency, both as an elected MP and an independent human being, is yet another demonstration of the patriarchal attitude that prevails in a country presided over by unquestionable paternal authority.

Feminist theorists and activists have spoken and written at length about the direct patriarchal link between the state and the family.

As early as 1969, ‘Sexual Politics’ author Kate Millett considered the patriarchal family as the fundamental instrument and the foundational unit of a patriarchal society, one that encourages its own members to adjust and conform to the will of the father figure.

It is the kind of allegation that is often aimed at Prime Minister Albin Kurti, who has been repeatedly accused of exercising unquestionable authority as the ‘father’ of the party he leads, Vetevendosje.

This criticism has been levelled by former party members, many of whom left the party to join the Social Democratic Party, as well as several civil society activists and political opponents from other parties. It is said that as ‘the father,’ everyone within Vetevendosje should abide by Kurti’s command.

This ‘unquestioned authority’ is also said to be met with unquestioning loyalty by Vetevendosje’s followers and admirers. Some critics have defined it as ‘worship,’ labelling Kurti’s followers as aggressive militants that have created a myth around his image.

Rather than debating whether such claims hold any truth, I would instead ask whether he is the only ‘father’ figure in Kosovo’s political scene that is admired so absolutely. Personally, I would argue that every political party in Kosovo has its own ‘father.’

LDK leader Isa Mustafa, for example, is the classic patriarch in action. As a privileged old man, honoured not only as the party leader but as a respected academic as well, he enjoys unquestionable respect and obedience.

He is officially introduced by his party members as “Academic” Isa Mustafa, and he is revered by LDK voters for holding this status, something typical for a society that puts more faith in academic titles than a person’s actual contribution to their field.

“Chief, forgive those who have slandered you and put pressure on you,” a young member of LDK wrote on her Facebook account in February. “Your political career and academic experience are proof that you are a politician of high caliber and a rarity in Kosovo politics.”

But regardless of his academic background, Mustafa is neither a man of education nor a scholar. Focused more on his political career (ethically controversial as it is), Mustafa has not contributed much to academia by way of written scholarship, nor has he maintained any meaningful engagement with university students in Prishtina.

Instead, he has shown greater interest in maintaining links to business and cooperating with anyone in politics that allows him to maintain power.

Despite a lack of visible electoral support for Mustafa, diverse voices within LDK are few and far between, both among the party’s younger generation and its more traditional branch, confirming that Mustafa has solidified his status as LDK’s unquestionable father figure.

Even Vjosa Osmani, the woman who as candidate for prime minister led the party to win more than 200,000 votes at the last election and enabled LDK to become part of the government, has shown that her ability to make her voice heard and respected regarding important decisions falls short.

Not only did we see Osmani encounter harsh opposition from Mustafa and her fellow colleagues in LDK when she refused to vote for Hashim Thaci to become President in 2016, we also saw very little of her while the negotiations to form the governing coalition with Vetevendosje were taking place.

Regardless of individual merit or political legitimacy, the last word in decision-making remains the privilege of the paternal leader Mustafa.

As for other parties, I’m not sure it’s necessary to go into detail when it comes to the former war commanders that have governed this country on and off for the last two decades. Who could replace such highly honoured personalities like Hashim Thaci or Ramush Haradinaj among their respective parties and voters?

These patriarchs’ wartime legacy, patriotism and the accumulation of wealth facilitated by their ‘leadership’ do not really need an army of militants to guard over their ideology. They have already done everything they wanted. They already have everything. And, by attempting to collapse the current government, it seems they are going for more.

They are the archetypes of the disturbing paternal figures that have dominated Kosovo’s political scene over the last two decades.

This is why the ‘father cult narrative’ should not be applied to Kurti alone. On the contrary, in comparison to the aforementioned symbols of ‘fatherhood,’ Kurti looks more like a ‘super dad,’ one of those fathers who plays with his child and changes her diaper occasionally, but lacks the experience to deal with the responsibility and complexity of the task of child raising.

Regardless of which ‘father’ one supports, the unquestionable paternal authority that these leaders in Kosovo have assumed for themselves reveals much about the way they have governed this country so far.

Their true legacy is the misuse of Kosovo’s resources and poor and chaotic leadership, which was accompanied by their followers’ applause nonetheless.