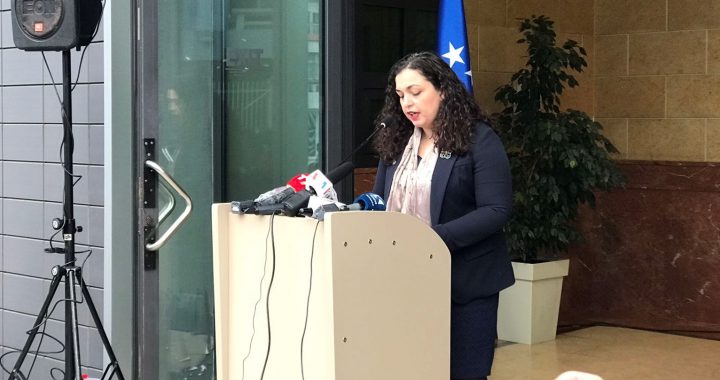 An extraordinary session of the Kosovo Assembly will be held at 11:00 on Wednesday to vote on the motion of no confidence in the government.

A parliamentary vote on a motion of no confidence in Kosovo’s coalition government has been scheduled for Wednesday March 25 at 11:00.

The motion of no confidence was initiated on March 18 by junior partner in the coalition government, the Democratic League of Kosovo, LDK, following the dismissal of former interior minister Agim Veliu. It has received vocal support from leaders of all the parties represented in the Kosovo Assembly, other than governing party Vetevendosje.

The decision to call an extraordinary parliamentary session to vote on the motion was taken at a meeting of the Presidency of the Kosovo Assembly on Tuesday.

Speaking after the meeting, Speaker of the Assembly Vjosa Osmani stated that the Presidency had voted for the motion to be held on Wednesday, with four votes in favour and two against.

Osmani added that she “absolutely did not support this motion” and called on MPs to vote against it.

The Assembly Presidency had previously sought advice from the National Institute of Public Health about whether such a session was possible in the midst of the coronavirus outbreak.

In a letter sent on Tuesday, the Institute replied that it “did not interfere with the fulfillment of the constitutional duties of state institutions.” However, it recommended that, were a session to take place, all workspaces should be disinfected and a medical examination conducted for each participant prior to entry.

Following the meeting of the Assembly presidency, Deputy Speaker of the Kosovo Assembly Arberie Nagavci voiced her concern at holding the session during the pandemic.

“If only one MP is infected, we all risk getting infected. And then the virus would spread because MPs come from all municipalities”, Nagavci wrote in a Facebook post.

In the lead up to the Presidency Assembly meeting, international representatives had called for political unity between Kosovo’s institutions.

In a joint demarche sent on Tuesday afternoon, the French and German ambassadors to Kosovo urged LDK to reconsider the motion, and “stay at the side of the Kosovo people in crisis.”

Earlier on Tuesday, the Quint Group, made up of ambassadors to Kosovo from the US, the UK, France, Germany, and Italy, also issued a statement urging leaders to focus on addressing the coronavirus outbreak and “preserve the integrity and functionality of Kosovo’s government and institutions.”