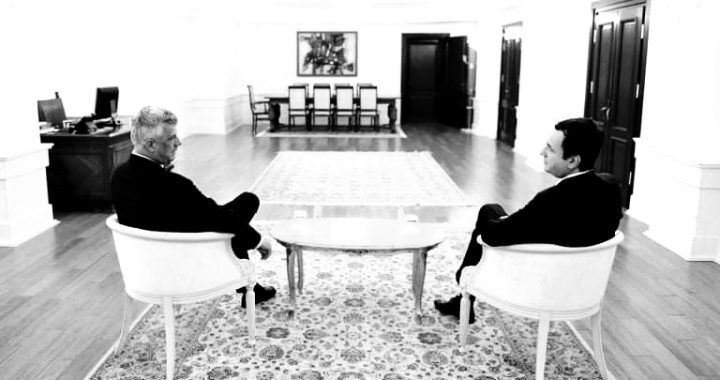 President Thaci in a meeting with PM Kurti. Photo: Office of the President of Kosovo.

The right way to lead the dialogue

The Kosovo Government’s eagerness to take a leading role in the dialogue with Serbia should be welcomed, but it must now be cautious of acceding to US demands just to placate its international allies.

On 15 March, the Kosovo Assembly passed a government-sponsored resolution which reiterated that the government is empowered by Kosovo’s constitution to lead international negotiations. It was a clear attempt to solidify its standing in relation to President Thaci, who has positioned himself as Kosovo’s sole representative in the dialogue with Serbia.

Enormous pressure has been put on Kosovo to agree to a deal with Serbia in recent weeks. The rhetoric emanating from the United States in particular has rapidly escalated in severity and, in-keeping with President Trump’s preferred method of communication, much of the pressure has been leveraged on Twitter.

Given the sensitivity of the issues under discussion, these often inflammatory missives are unhelpful and all they really achieve is that they call into question the temperament of those who send them.

Yet, beyond the fact that those charged with facilitating relations between Kosovo and Serbia should refrain from conducting international diplomacy via tweets, the current push to sign a deal is not motivated by what is best for Kosovo and should be resisted.

The government’s move to wrest control over the dialogue with Serbia away from President Thaci is a welcome development for a number of reasons. First, the government is not just constitutionally mandated to fulfil this role, it enjoys greater popular legitimacy than the Office of the President. The government is additionally inherently more accountable to the electorate and the Assembly than the President.

Thus far, the negotiations between Thaci and President Aleksandar Vucic of Serbia have been characterised by secrecy, and – given Thaci and Vucic’s respective roles – they have lacked parliamentary oversight.

This opaque, elite-level process has enabled the presidents to operate without sufficient scrutiny and by definition engage in a form of bartering which is devoid of popular support.

Secondly, predicating future relations between Serbia and Kosovo exclusively on negotiations conducted between Thaci and Vucic gives enormous power to two individuals who have – at the very least – questionable motives.

Vucic – one of Europe’s more prominent “new authoritarians” – has consistently failed to demonstrate any remorse for the violence committed by Serbia in Kosovo in the 1990s. He has also encouraged his ministers to engage in a long-running strategy to undermine Kosovo both through the infamous ‘derecognition’ campaign, and by blocking Kosovo’s membership of many international organisations such as Interpol and UNESCO.

Vucic has additionally demonstrated that his interest in Kosovo’s Serbian community extends only to ensuring that its representatives are pliant factotums of Belgrade, singularly mandated to disrupt Kosovo’s institutions and block any moves towards improving inter-community relations. This approach works for Vucic at the expense of dealing with the far more pressing issues facing Kosovo’s Serbs, including unemployment and education.

While Thaci has often presented himself as a heroic patriot, he has been central to the process of state capture which has severely hindered progress in Kosovo since 1999. Thaci may style himself as a selfless servant of his people, but the reality is he has worked for his own benefit at the expense of his people.

As such, Thaci’s goal in the negotiations is not to achieve what is best for Kosovo but rather to ensure that his status and position of privilege remains secure, a situation most obvious with respect to his willingness to countenance a “land swap.”

Negotiating the role of the US

As figures from the US have increasingly demanded that Kosovo’s newly elected government repeal the 100 per cent tariffs imposed by the previous government, and ultimately sign a deal with Serbia, the relationship between the US and Kosovo has become an emotive topic within Kosovo.

The possibility of opposing US demands appears to have particularly spooked LDK, the smaller party in the current governing coalition.

Kosovo Albanians are understandably grateful for the US’s central role in ousting Milosevic’s forces in 1999 and the support afforded to Kosovo by the US when it declared independence in 2008. The presence of US troops in Kosovo as part of KFOR is also widely seen as a necessary barrier to a future Serbian military incursion into Kosovo.

As such, a desire to maintain good relations with the US is – given Kosovo’s size, meagre resources and vulnerable international status – clearly prudent. Yet, this does not necessitate acceding to US demands when the consequences of so doing fundamentally compromise Kosovo’s best interests.

In determining how to respond to the current pressure being exercised by certain US figures, it is important to understand why this pressure is being applied now.

It is surely no coincidence that this is happening during an election year. Having failed to achieve any notable successes on the international stage since the 2016 presidential election, Trump’s administration is naturally keen to celebrate “success” by brokering a Serbia-Kosovo deal.

Hence, the impetus to strike a deal quickly – or to remove the tariffs “now” – is not born from a determination to do what’s best for Kosovo, but rather to orchestrate a self-serving photo-op on the White House lawn that will help with Trump’s re-election campaign. Kosovo cannot allow itself to be drawn into this tawdry Machiavellian spectacle.

The US officials currently pushing for a deal and issuing dire threats have an almost non-existent track record when it comes to supporting Kosovo, and have demonstrated little more than contempt for its people through their actions.

Those who have worked in and with Kosovo for decades – such as Shaun Byrnes – have cautioned the Kosovo Government against being bullied into accepting a bad deal purely to placate the notoriously short-sighted and ill-tempered current US administration.

For too long, Kosovo has been asked to make painful concessions for the benefit of its neighbours whilst getting little in return. The current drive to strike a deal with Serbia must be seen in this context.

At the very least Kosovo deserves visa liberalisation for travel in the EU’s Schengen zone, recognition that its territorial integrity will not be compromised, and a guarantee that Serbia will cease its derecognition campaign and accept responsibility – and liability – for the crimes committed in the 1990s.

To date, Kosovo has adopted a subservient stance which has borne little fruit. Fawning compliance may have garnered the occasional pat on the back from powerful allies, but it ultimately degrades Kosovo’s putative status as a sovereign, independent state worthy of international respect.

Kosovo’s claims and interests are just, and should not be compromised to appease the short-term, self-interested aims of the current US administration.