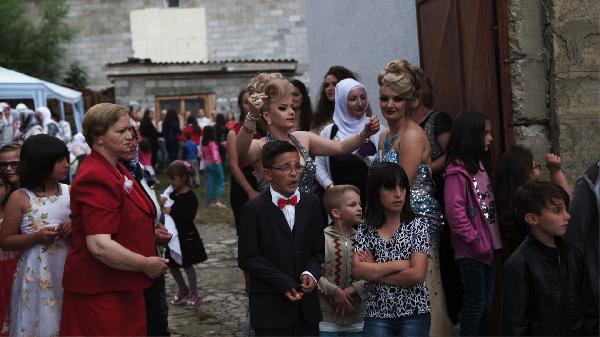 Still from Lord of the House.

Unpacking Kosovo’s cultural traditions in Lord of the House

A look at customs in rural Kosovo, Lord of the House raises quintessential questions about the difficulty of being a woman and choosing your own path.

“A woman is like a sack. Her task is to carry.” This is the opening line of Lord of the House, a film set in contemporary rural Kosovo, following a group of women and girls as they face the challenge of bridging contemporary culture with centuries-old traditions.

Told through the perspective of men and women, both young and old, Lord of the House holds a mirror up to how society forges the relationship between genders and how that relationship can determines one’s entire existence.

Viewers find themselves audience to semi-intimate moments in the lives of girls and women across Kosovo: a dance class, a wedding dress shop, family life in Opoja. Although leading observably separate lives, they are all bound to the same set of traditional obligations, made starkly apparent when each reads a different section of the Kanun, a set of traditional Albanian laws taken literally by its followers. These women discuss life in the shadow of marriage and household responsibility, which seem to underlie almost all aspects of a woman’s life in the film’s universe.

The film centers largely on the emotional journey of Xhejrane, a 60-something-year old single mid-wife, who ran away from her home as a teenager to continue her education. Having paved the way for her younger sisters’ to also be education and financially independent, Xhejrane now sits as a leader in her community and the voice of the women in her family. The film showcases Xhejrane’s genuine internal battle with the fact that her successes were in direct conflict with the values of her family.

Although the film lacks perspective outside of the small rural areas of focus, the beauty and variety of Albanian customs is not lost. Viewers are able to witness the vast emotion put into local song and dance; the beautiful, painstaking detail of the clothing; and the rich traditions that encompass celebration, all of which would not be possible without women’s labor.  But, take a microscope to look at these things and we are confronted with the uncomfortable realities these women face. Beauty comes at a cost. Life is hardship.

Unfortunately, the film doesn’t take its audience into more complex situations a modern woman might face today other than marriage. Domestic violence and the impact of social inequity both remain lingering ghosts in the background of the film; the audience feels their presence, but is never allowed to explore the implications.

Regardless, Lord of the House begs important questions that many cultures are and should be asking. Can women respect tradition and their own desires simultaneously? Is tradition allowed to evolve in tangent with society, or does it mean some people will always be repressed for the convenience of custom?  Why is it so difficult to imagine a world where women aspire (and are taught to aspire) to be more than just someone’s bride? What is lost when tradition is threatened? Conversely, what is gained? But other than Xhejrane’s grand gesture of self-determination, viewers are left to contemplate the answers for themselves.

Many people interviewed in the film reflect on ideas that seem opposing to them: then vs. now; men vs. women; family obligation vs. free will. And at the end, viewers are again faced with the Kanun’s less than poetic comparison, this time read by Xhejrane herself. “A woman is like a sack. Her task is to carry.” Xhejrane broke tradition when she chose what she wanted to carry, proving that the only dichotomies in existence are the ones we create. Should household power dynamics continue the transition to compliment contemporary society in Kosovo, the weight of this evolution will likely only live to see success if carried by Lords and Ladies both. Whether that is possible in contemporary Kosovo is left to the imagination of the audience.

Lord of the House will be screened on Thursday, August 10th at the Bahce cinema as part of Dokufest, the International Documentary and Short Film Festival held in Prizren, Kosovo.