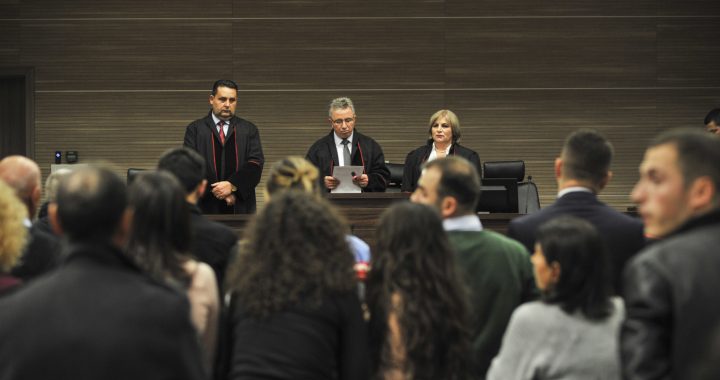 Atdhe Arifi, Frasher Krasniqi, and Egzon Haliti, the three Vetevendosje members charged with  terrorism, were released from detention today by the Court of Appeals.

The three defendants were found guilty of attacking the Kosovo Assembly building in August 2016 by the Basic Court, but are currently appealing the verdict together with the fourth defendant, Adea Batusha, who was not in detention due to her lower sentence.

On Monday, the Court of Appeals decided to free the remaining defendants while awaiting appeal, judging that “legal reasons for them to be kept in detention have ceased to exist.”

The four defendants are currently appealing their guilty verdict and sentences from eight to two years of prison. The four Vetevendosje members, one of whom — Frasher Krasniqi — is an elected MP, are standing trial for attacking the Kosovo Assembly with an RPG.

Last Wednesday, the defendants presented their appeal to the Court, arguing that the Basic Court had no evidence for its verdict.

Atdhe Arifi’s defense lawyer Ramiz Krasniqi argued that the verdict, which found all of the defendants guilty of terrorism, was baseless.

“It is a cynical verdict, rough, ordered and clearly not supported by any evidence,” Krasniqi said.