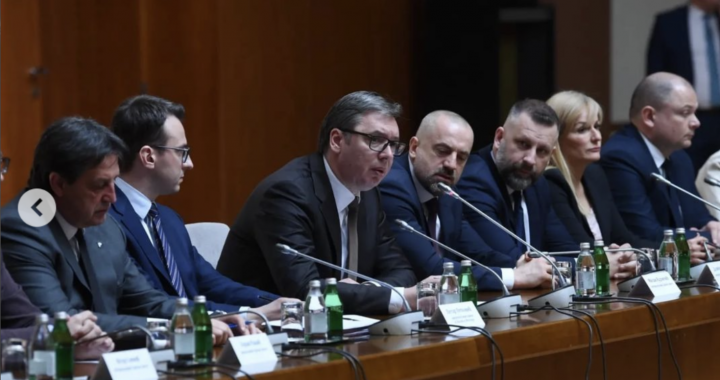 US blacklisted businessman, wanted also by Kosovo law enforcement, was seen sitting next to Serbian President Aleksandar Vucic when he met Kosovo Serbs to discuss Serbian elections on Tuesday.

At the meeting with Kosovo Serb political representatives in Belgrade on Tuesday, the deputy head of Srpska Lista, [Serbian List], Milan Radoicic – who is under US sanctions, and is wanted in Kosovo – was seen seated next to Serbian President Aleksandar Vucic.

The meeting was held in connection with Serbia’s national elections due on April 3, after which Vucic confirmed that Kosovo Serbs would vote in these elections, but in Serbia.

In a photo shared by Vucic on Instagram, Radoicic appears on his left side.

Radoicic is among several other Kosovo Serbs that the US Treasury Department has blacklisted.

The Office of Foreign Assets Control within this department publishes lists of persons and their companies in certain countries, which are called “Specially Designated Nationals”.

With their inclusion on the list, their assets are blocked in the US and American citizens are barred from cooperating with them.

In addition, Radoicic is suspected in Kosovo of being involved in the assassination of the moderate former Kosovo Serb politician Oliver Ivanovic.

The Special Prosecution of Kosovo has declared him a wanted person over the unresolved murder case.

In February this year, Prishtina Insight reported that Radoicic had evaded arrest by the Kosovo Police at the Kosovo-Serbia border crossing at Brnjak.

This was the second time he had escaped the net of the Kosovo Police.

In March last year, a Pristina Basic Court confirmed that an earlier arrest warrant for Radoicic over the murder of Ivanovic had been withdrawn.

The indictment, filed in December 2019, had named Radoicic and another prominent Kosovo Serb, Zvonko Veselinovic, as leaders of the criminal group responsible for the killing. It accused several policemen of aiding the crime.

In November 2018, Kosovo Police tried to arrest him at his home in Mitrovica, but found only 75 grams of cocaine.

Radoicic, who then fled to Serbia, has denied wrongdoing and claimed he had escaped murder.

“They came to my apartment where I live with my wife and little children, with an army of people armed to the teeth, with only one aim – to kill me,” he said after police raided his home.

Officials from Serbia, including President Vucic, have defended Radoicic from the various accusations.