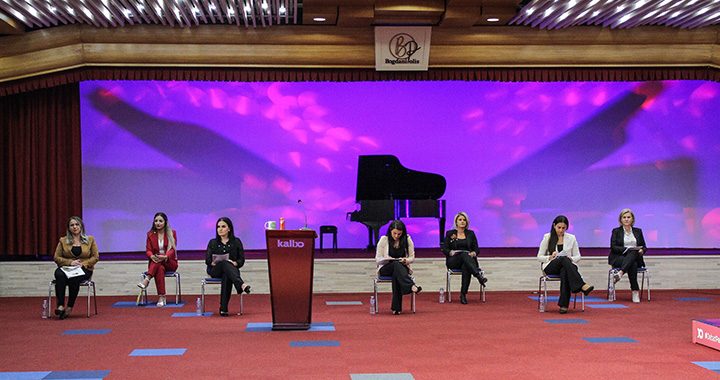 Kosovo municipality assembly member candidates have pledged that if they win a seat at their municipal councils, they will focus on social issues, with special emphasis on raising the voice on behalf of local women.

The list of priorities for Kosovo municipalities might be too long and pandemic may have added salt to the wounds of local governments all over the country because of big expectations from the elected ones on the one hand and lack of budget to meet all the expectations on the other.

For women things get more difficult as local institutions are not yet implementing a gender-friendly share of the budget, let alone the representation in municipal offices.

Through the series of pre-election debates Debat Pernime aired in TV Dukagjini, BIRN Kosovo, supported by DEMOS, has provided a special opportunity to women candidates for municipal assemblies to elaborate their plans in a time when men candidates dominate the political show in other TV channels.

Kosovo voters will go to ballot boxes on October 17 to elect their mayors and municipal assemblies for the next four years.

Candidates have now been picked by political parties and, as expected, only few women have been given the chance to run, over 95% of the candidates are men. But running for municipal assembly members, many women are trying to fill the void.

During Kosovo’s post-war history, only one woman ruled in the municipality, while only a few of them have been given the chance to run. Only Mimoza Kusari Lila, then a candidate from the New Kosovo Alliance, AKR, had been mayor of Municipality of Gjakova in the 2013-2017. This year, Kusari-Lila is aiming to return to the office through Vetevendosje.

In the cycle of municipal election debates Debat Pernime with Jeta Xharra, positioned on the right side of the candidates for mayors, the candidates for assembly members for the first time have been given space to unveil their governing programs, if they manage to win a seat in the assembly.

The Vetevendosje candidate for assembly member in Rahovec, Merisa Sharku-Vuqiterna, has the main priority of subsidizing the businesses of women in Rahovec and the career orientation of young girls.

Coming from a town where women share a great burden of agricultural work, she gets emotional when speaking about her plans as councillor.

“If I can not get the money anywhere to give it to women as grants, I will take half of the subsidies given to men who are given for agriculture,” Sharku-Vuqiterna said.

“Most of the national costumes are made in Rahovec, but the women of Rahovec are never subsidised. They educate us with the handicrafts they make and sell. Women will be subsidised by setting up businesses because they are working at home,” she added.

“If I can not get the money anywhere to give it to women as grants, I will take half of the subsidies given to men who are given for agriculture.

An architect by vocation, Sharku-Vuqiterna is running for assembly member for the first time. She says that she is not attracted to politics as a profession, but has seen it as a powerful weapon through which she can fight gender discrimination. But she does not like the fact that women are not being given space in debates to push their causes.

“How can I get the vote from someone who tells me not to interfere because this [architecture] is a man’s job? When you raise issues within the municipality or on social media, they do not take you seriously and it is different when you come out in a debate.”

Taking the opportunity to reveal the priorities during the debate, the candidates for assembly members, in addition to the gender issue, which they have ranked first, are also aiming to advance the youth; solve infrastructural, educational and cultural problems.

The candidate of the Democratic League of Kosovo, LDK,  for assembly member in Kaçanik, Ardita Rrahmani said that if she takes the position of assembly member, among the priorities is the advancement of youth, depoliticization of education and raising culture in Kaçanik.

Besides this, Rrahmani, who leads the LDK candidates list in Kaçanik, told BIRN that the lack of promotion of girls and women in all aspects has meant that there is currently no female head of the municipal directorate in Kaçanik.

“It is a problem to vote for a woman in Kaçanik. I can not determine how much problem it is, but it is a problem.”

During the mandate of Besim Ilazi from PDK, in Kaçanik was only one woman director, and ironically in August of this year she was relieved of the duty as head of the Directorate of Health and Social Welfare.

“I think women should be given a chance to run [for local elections] first. Then it is women who decide whether they want to enter this race. I am also proving that I am part of the competition, this is being also proved by my colleagues of other subjects in Kaçanik “the 25-year-old said.

Rrahmani in the parliamentary elections of February 14 had run for a seat in Kosovo parliament and ranked first in the five most voted among LDK candidates in her municipality with 759 votes.

According to her, women, in addition to election campaigns in the municipalities, should be given space in election debates to promote their skills even in front of the wider public, even for a few minutes.

There is progress, but…

Lack of space for women to show their professional skills in institutions is also highlighted in the municipality of Lipjan.

Egzona Bytyçi is seeking the vote as a candidate for the Democratic Party of Kosovo, PDK, for Lipjan municipal assembly. She maintains that a lot of work is still needed to advance women to the positions they deserve in institutions.

“I consider that lately we have made progress in this aspect, but still we need additional work and motivation from the party structures. But also from the family that supports us in this aspect “, she said.

Bytyçi, who is running for assembly for the second time in Lipjan, said that if she manages to win a seat, she aims to contribute to raising the culture and health infrastructure and gender diversity in policy-making.

A doctor by vocation, she emphasized that she needed to express her priorities in a debate in order to be as close as possible to the citizens through public appearances.

“Not every time we have been offered the opportunity to be as close to them [citizens] as possible, especially now in the era of the pandemic,” says Bytyçi.

In Vushtrri, Amire Ajeti says her focus will be a better representation of her peers.

As candidate for Alliance for the Future of Kosovo, AAK, the 19 year-old says she plans to advocate for a better education infrastructure for children, especially in the opening of new kindergartens.

“I think it is very reasonable for me to initiate the construction of a kindergarten in the village where I live where at least six people will be employed, one of them may be a neighbor of mine who has completed pre-primary education and is unemployed,” Ajeti told BIRN.

Ajeti stresses that it was very necessary for her to try to contribute to the improvement of the situation of the municipality through the reply in Debat Pernime and the disclosure of priorities.

Although young in age, Ajeti says that she has been following politics for four years and participates in campaigns and meetings with branch structures and women of the Women’s Forum in AAK.

“I am young, so it was very important for me to raise my voice and start working in this direction,” says Ajeti, whose unemployment and injustice to young people have pushed her to run for assembly member.

Kosovo election law provides that in each political entity’s candidate list, at least 30 percent shall be women.