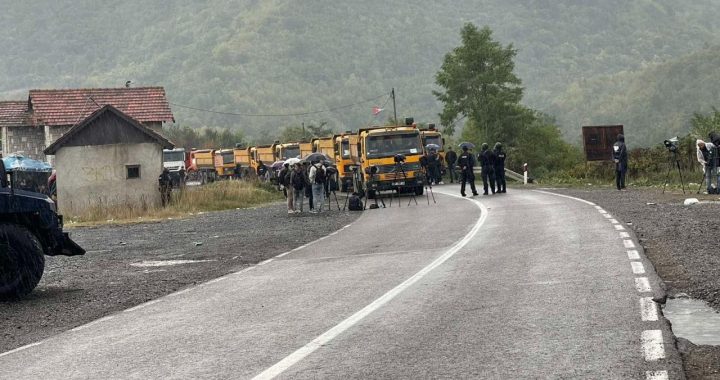 Kosovo Serbs in trucks block the road to the Jarinje crossing with Serbia on Monday. Photo: BIRN/Adelina Ahmeti

Two border crossing points between Kosovo and Serbia are being blocked for a second day by Kosovo Serbs protesting against new regulations forcing them to change their Serbian vehicle registration plates to Kosovo ones when entering the country.

The Jarinje and Bernjak border crossing points in Serb-dominated northern Kosovo remained blocked on Tuesday morning after local Serbs obstructed the roads with dozens of trucks in protest against changes to border regulations for vehicles with Serbian registration plates, Kosovo media reported.

Kosovo deployed armed police special forces on Monday after the Pristina government imposed the new regulations, which say that people entering Kosovo must change Serbian vehicle licence plates for temporary Kosovo ones when entering the country – as drivers with Kosovo plates have had to do when entering Serbia for the past two decades.

Kosovo media reported that goods transit has been stopped at the Jarinje and Bernjak crossing points, while buses can only take their passengers to the blockade, around 800 metres from the border, leaving them to cross on foot, Kosovo media reported. Some Serb protesters camped out in tents overnight, according to media reports.

Kosovo officials meanwhile insisted that what they described as the ‘reciprocity measures’ only ensure equal treatment for the citizens of both countries, and claimed that the protesters are being used by politicians from Belgrade.

“The decision ensures equal treatment and free movement for the citizens of both countries,” Kosovo’s President Vjosa Osmani wrote on Facebook post on Monday evening.

Osmani added that the decision “is being strictly implemented at all border crossings, except for two in the north [Bernjak and Jarinje], where local Serbs are being abused by the Serbian government and illegal structures there”.

Deputy Prime Minister Besnik Bislimi told Kosovo public broadcaster KTV on Monday evening that the decision to impose the new regime in the country’s “national interests” and “is not directed against Serbs”.

Bislimi expressed concern about possible “further escalation”, and accused Serbia of often being a destabilising factor in the region.

In Belgrade, Serbian President Aleksandar Vucic scheduled an emergency session of his National Security Council for Tuesday, at which the main topic will be the situation in Kosovo, Tanjug news agency reported.

Vucic has warned of possible economic and political sanctions against Kosovo, although Bislimi insisted that this would not harm his country, which should not be “afraid of any measures”.

The dispute erupted after a previous agreement on licence plates between Pristina and Belgrade, which was signed in 2011, expired on September 15, and the Kosovo government decided to seek equivalent treatment for cars with licence plates with the letters RKS, for Republic of Kosovo.

But Serbia refuses to recognize either Kosovo’s independence or the RKS plates. It does only recognize plates with the letters KS, which were first issued when Kosovo was under UN administration, and were intended to be ‘status-neutral’, but the Kosovo government no longer recognizes these.

Under the now-expired agreement from 2011, vehicles with RKS plates had to change them at the Serbian border and receive provisional paper plates, although vehicles with the ‘status-neutral’ KS plates could pass freely. Vehicles with Serbian number plates could enter Kosovo freely, without extra procedures.

Serbian President Aleksandar Vucic insisted on Monday that Belgrade had tried to resolve the issue and had raised it “countless times” during EU-facilitated talks with Pristina officials. But opposition politicians have accused him of failing the Serbs in northern Kosovo.

Bislimi meanwhile that the Kosovo government will reimburse people in the Albanian-majority Presevo Valley area of southern Serbia for any costs they might incur as a result of the decision to no longer accept Serbian licence plates.

Since coming to office this year, Prime Minister Albin Kurti has repeatedly pledged that his government will demand reciprocity in all areas from Serbia.