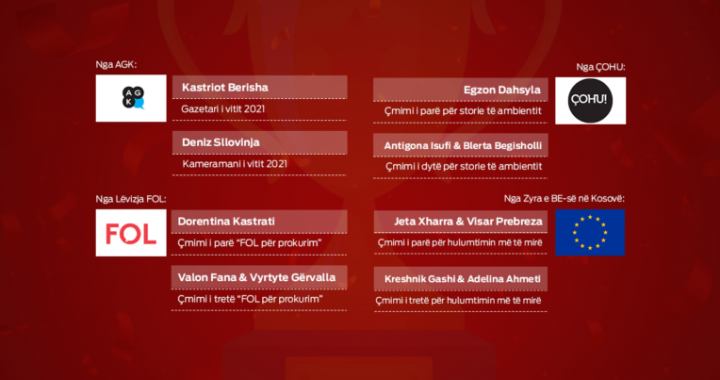 BIRN Kosovo staff won eight awards over the year for groundbreaking stories on corruption, public procurement and the environment, as well as taking the journalist of the year and cameraman of the year 2021 awards.

A far from usual year for the world, 2021 was a challenge for Kosovo as well. After another year in a pandemic, Kosovo had two set of elections and saw a major shift of political power, giving a ray of hope for the future of its new democracy.

As parts of the world witnessed the strengthening of authoritarian regimes that expanded their oppressive habits and became even keener on muzzling the media, independent media organizations awarded journalists for safeguarding freedom of expression.

Freedom of expression “is the precondition for democracy and lasting peace”, the Nobel Academy said in awarding the Nobel Prize to journalists Maria Ressa and Dimitry Andreyevich.

Throughout the year, BIRN continued reporting, investigating and presenting to the public some of the most pressing issues, and these were some of the prizes its staffers received:

KALLXO.com journalist Kastriot Berisha was given the Journalist of 2021 awarded by the Association of Journalists of Kosovo, AGK.

Berisha was awarded for his research in the justice sector, which had a significant social impact and resulted in the launch of criminal investigations, disciplinary action and the suspension of a judge.

His first investigation into the Gjilan Prosecutor’s Office revealed a scheme of engaging medical experts as forensic experts in violation of the law.

The second analyzed a scandalously light sentence issued by the Peja Court for the rape of a 15-year-old. The in-depth analysis of the verdict revealed major violations of the law and called for an investigation.

AGK awarded Denis Sllovinja as Best Cameraman of 2021 for his work in his shooting a story entitled, “Pilot since the age of 17”. For the shooting of this video he had used three technological devices: a drone, a GO PRO camera, and a device for recording interviews.

In May 2021, BIRN investigative journalist Doruntina Kastrati won first prize for report in the field of public procurement in Kosovo, from the FOl Movement, entitled, “Suspicious tender for minister’s family”.

In July 2021,  the BIRN team was awarded the Best Investigative Prize by the European Union, with first and third prizes for their stories.

First prize went to editor-in-chief Jeta Xharra and editor Visar Prebreza, for research that revealed that businessman Blerim Devolli was behind six companies that have earned millions of euros from the sale of solar energy.

Editor Kreshnik Gashi and journalist Adelina Ahmeti won third prize from the EU for their research on smuggling.

On December 20, three BIRN journalists were awarded the Environmental Prize for stories on the environment.