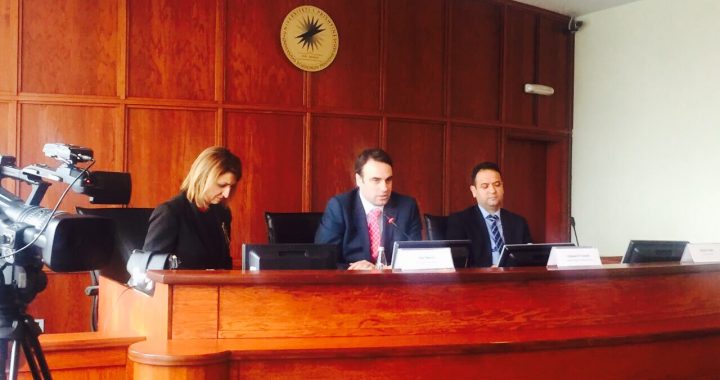 Ambassador Ruairi O'Connell at the Faculty of Law. | Photo: BIRN.

At the Faculty of Law in Prishtina, Ruairi O’Connell discussed the current state of affairs and justice in Kosovo with future lawyers and judges.

On Tuesday, the British diplomat opened the discussion with students from the Faculty of Law – future judges, prosecutors and lawyers – with a single, straight-forward proposal: “Do not become corrupted.”

For the last two years, O’Connell served as an ambassador of Great Britain to a country that is listed by international reports as one of the most corrupt, especially regarding the judicial system.

“Kosovo needs a new generation of lawyers. It is disturbing to witness the level of corruption operating in Kosovo. It is almost unbelievable,” he said.

“Do not place a price on yourself with which you can be bought.”

O’Connell also commented on the roles and power of foreign diplomats, including himself, saying it was limited in terms of reforming the current political class.

“I haven’t done anything to remove Kosovo’s corrupted class. I am not responsible for deciding who will be a prime minister or an MP in Kosovo. You, on the other hand, have the power to vote. You have more power than I do here. I don’t have a drop of power, I can only speak for Great Britain,” said the British ambassador.

In many court cases, he recalled, the outcome favoured the political class, such as in the case of Sami Lushtaku, the mayor of Skenderaj.

“Let’s discuss the case of  Mr. Lushtaku, who unfortunately was released from the correctional facility and did not stay in prison. He was allowed to go to the hospital, to stay there for a bit and then go home. When we talk about principles it is easy, but when we discuss specific cases, it’s not always the same,” he said.

“Judges need to act according to the law, impartial to the very end,” added O’Connell.

Although nepotism is an apparent problem in Kosovo, he also added that it does not mean that Kosovars are more susceptible to corruption than others.

“The problem lies with the system that was created shortly after the war. As such, Kosovo has not fought for its independence to only then be ruled by others,” he said.