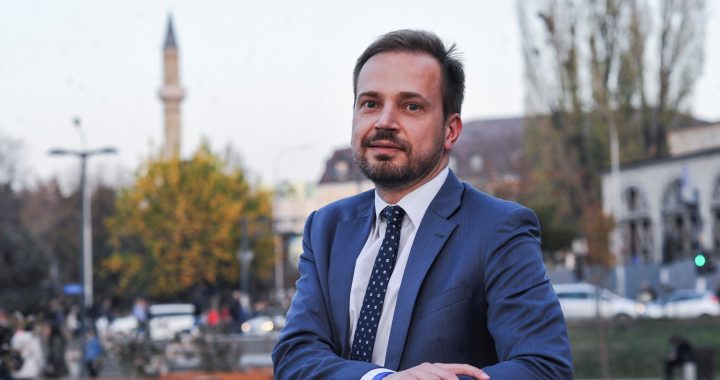 Chlad: “Giving up on education means giving up on our future generation”

In an interview on education issues for Jeta ne Kosove, Libor Chlad, Deputy Head of Cooperation of the EU Office in Kosovo calls for parents, teachers and public officials to take charge of reform for the benefit of Kosovo’s youth.

Chlad, who has been engaged in social and educational issues within the EU Office in Kosovo since 2014, said that the state of  education  is “concerning,” and reform in many directions is necessary.

“You will recall the alarming PISA tests results which showed us the urgency of the need for reform of Kosovo education. The poor quality of Kosovo education has been confirmed by the “Human Capital Index” of the World Bank, too,” he told BIRN.

Chlad emphasized the need to make Kosovo’s young students a priority, and said that institutions need to fight corruption with no compromise and no nepotism of any kind, in order to build the infrastructure for fairness and equal opportunity both in the short and the long term.

“These negative phenomena have a high cost that no society is rich enough to afford,” he told BIRN. “In education they hurt twice: not only do they lead to suboptimal decisions, but they also set the wrong example to the next generation.”

“In particular, there is no room for nepotism, clientelism, corruption, fraud and other phenomena that cripple the performance of the system and set the wrong examples of behaviour for the young Kosovo generation,” he continued. “Compromising high quality means disqualifying Kosovo graduates from future opportunities. It takes a long time to build reputation, but it can be destroyed overnight.”

Other than listing the difficulties that the education system faces in Kosovo, Chlad recommended a number of measures that, if implemented, could improve in both the mid term and long term the overall state of education in Kosovo.

According to Chlad, one of the key focuses of the Ministry of Education should be in increasing transparency and accountability. “We must be able to demonstrate that the public funds are used for a legitimate purpose, in line with applicable rules and that the best value is obtained for the benefit of all Kosovo citizens,” he said.

Along with with the augmentation of transparency and accountability, the Ministry of Education should likewise work on professional development of its staff — the teachers. According to the EU, official tangible steps should be taken.

“Given their central place in the learning/teaching process, they have the immediate responsibility for children to learn the skills and values that will enable them to succeed in the European and global labor market of the future, and be active citizens of Kosovo for the benefit of the whole country.”

Chlad told BIRN that the EU had invested over 65 million euros since 2007 in the education sector in various forms, and simultaneously invested in monitoring and assisting the institutions of education with its expertise.

“We have supported, for example, the legislative work, institutional and capacity building as well as infrastructure and equipment to improve the learning/teaching processes across Kosovo,” he said.

One of the successes of the EU Office in Kosovo, according to Chlad, has been their assistance in the recruitment process at the Ministry of Education, and the restructuring of the Ministry has had positive results so far, he said.

“At the request of the Ministry, we have commissioned a functional review which has resulted in concrete recommendations based on European best practices. We will continue to provide our assistance to him [the Minister of Education] as required to ensure that the key managerial positions in the Ministry are filled with people possessing the required skills and qualifications and whose integrity is beyond doubt,” he said.

Chlad further called for the parents, media and civil society to watch closely and monitor whether the process is conducted in line with the principles of transparency, fairness and equality.

Another evident problem, according to him, is the need to improve student textbooks and take other measures of reform that guarantee equality.

“Learning/teaching tools, including IT equipment and textbooks, must be reviewed and updated so that they are accurate, free from stereotypes and prejudices and in line with the values we share and cherish in Europe. This includes principles of gender equality and non-discrimination on grounds of ethnicity, nationality, language, gender, religion, background, belief, opinions or sexual preference,” he said.

Kosovo’s laws should be aligned with the EU acquis communautaire, the EU’s body of legislation and court decisions, said Chlad, and the economy should be progressively integrated into the European single market.

In view of the ongoing EU accession process, said Chlad, Kosovo law should be aligned with EU acquis communautaire and the economy progressively integrated into the European Single Market.

“This obviously offers a lot of new opportunities for Kosovo business and citizens, but there are challenges too,” he said. “Kosovo young people, specifically, will need skills that will enable them to succeed in the fierce competition in the labor market of the future.”

Chlad stressed the importance of ensuring quality education and teaching capacities in high risk fields such as medical degrees and training for health professionals.

“There is a system in place for a reason, to ensure that this exclusive career is reserved for the best. It serves as a guarantee that your future doctors will learn what they need to be perform up to the standards of modern medicine, he said. “Would you like to be operated on by someone without a proper qualification? The high demand for medical education cannot justify compromising on its quality.”

The reform of education in Kosovo transcends beyond the Ministry of Education, and in a fast world, individuals occupy an important space, according to Chlad.

“Education is not just for state institutions. The world evolves quickly and it is an individual responsibility for all of us to stay up to date,” he said. “Lifelong learning has become a necessity. The information is available and the challenge is to work with it, analyze it with a critical eye and come to own conclusions. How not to get lost in the avalanche of information, how to build and present an argument are some of the crucial skills.”

Despite acknowledging the crucial role of the EU in improving education, Chlad ultimately believes that if reform is to come to life, it is a matter of willingness from Kosovo media and the general public to demand improvements in the interest of Kosovo youth.

“Fixing the educational system is a long-term mission, the results of which will show when the next generation leaves school. Giving up on it, though, would mean giving up on the future generation.”

“Higher education caters for the brightest in every society and prepares them to be the future leaders, whether lawyers, economists, engineers or medical doctors. The requirements on those who teach are therefore very high,” he said.

Chlad believes that for educators to have the privilege of teaching future generations, their own academic achievements should be well-documented.

“[Academics] had many years of experience and a track record of professional success in their area of expertise earned by many years of academic work. I do not believe that this can be achieved overnight, but is a result of hard work and determination recognized by others.”