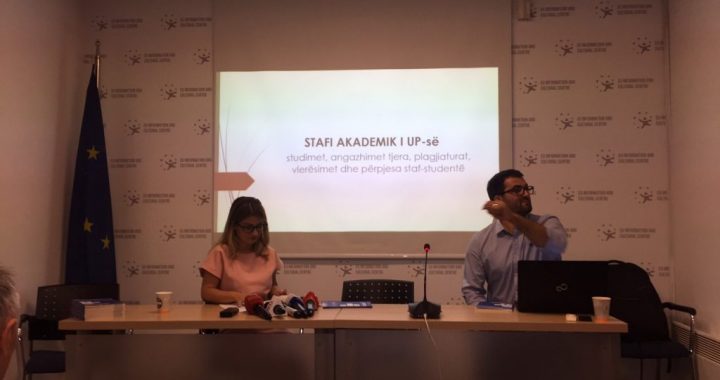 Irregularities at University of Prishtina continue

Plagiarism, lack of space and absence of professors are the key issues plaguing the University of Prishtina, a study published today finds.

In a publication that was released today, named “The UP Academic Staff,” plagiarism, lack of infrastructure and other engagements of the professors outside of University of Prishtina, UP, continue to hamper the functioning of the University.

The author of the report, Shkelzen Gashi, came out with some of the findings from the 76 pages, which depict some of irregularities at the public University of Prishtina, beginning with plagiarism in their personal research, employment of university staff in institutions outside UP, the lack of space for students and other infrastructure problems which affect the quality of studies at the University.

The findings also directly disclosed names of the staff who have plagiarised their work, yet continue to be employed by the University unpunished.

The institution who published the report, Admovere, a transitional justice organization based in Prishtina, interviewed 50 professors for the purpose of the study, with at least three from each faculty and 10 deans across various UP faculties.

Of the 10 deans interviewed, not one claimed they were aware of any plagiarism cases within their staff, despite a number of revelations of plagiarism throughout the University in the last few years.

“Out of total of 16 academic staff members whose plagiarism was disclosed to the media, 11 have never commented on the accusations. And only 3 have been suspended from teaching, but all three returned later,” the publication reads.

Out of 840 academic staff with CVs posted on the UP website, 31 per cent are engaged in other public or private higher education institutions, which also indicated the quality of teaching at the University. According to the publication, all of the interviewees claimed that there are many absent professors, yet “out of 840 academic staff members in the UP, there is no concrete case of any teachers penalized for absence.”

According to the interviewees in the study, they strongly believe that engagements outside of UP have a negative impact on the teaching process.

The publication also suggested that in order to improve the teaching process, a restructuring of the anonymous online assessment mechanism students can fill out would be useful, detailing the performance of the academics at the University individually.

The University of Prishtina hosts more than 48,000 students. In this academic year, more than 8,900 students with be admitted to the public University, which was established in February 1970.

The largest public institution in Prishtina, UP’s physical infrastructure, in particular the physical space within university buildings in ratio to the number of students, was also assessed, the report concluding that the institution stands in a “poor” condition.

The report explained that each student has, on average, 1.77m2 of space, highlighting also the fact that Faculty of Economics and the Faculty of Law share the same building.