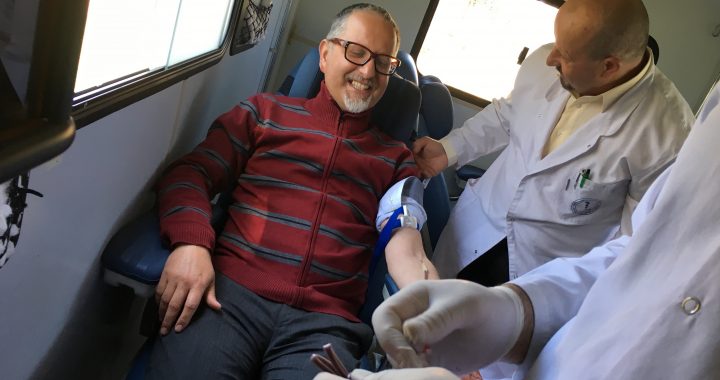 Taukbashqe and Sofalia residents came out today to donate blood, in solidarity for those who lost their lives in the 1944 and ’99 massacres.

On 28 March 1999, Albanians living in Sofali and Taukbashqe, were targeted by  Serbian forces; some of which were expelled from their homes, while others were brutally killed. The volunteer campaign also commemorates the execution of 74 activists that fought for Albanian national liberation in 1944 by Yugoslav partisans.

To commemorate the 18th and 72nd anniversaries of these events, the Kosovo National Blood Transfusion Center set up a blood transfusion van for volunteers to donate blood in a symbolic gesture.

Enver Redenica, a resident of Sofalia, and one of the organizers of the event, said that blood donation is the only way they still commemorate the event.

He also said that they had requested to place a commemorative plaque but the Ministry of Environment and Spatial Planning, MESP, refused it due to a “conflict of interest”.

Ten of the victims of the 1999 massacre were from the neighborhood. As a result, area blood donors have increased partly in remembrance of the victims, but mostly in hope of saving future lives. The Director of Health and Social Welfare from the Municipality of Pristina, Arben Vitia, was among the blood donors.

“This is the third consecutive year that this event has taken place, and we urge residents of Prishtina to become part of the blood donating community,” said Vitia, who said there were two messages that the event tried to drive home.

“First, that the past should not be forgotten, as history has a habit of repeating itself, as we can recall exactly happened with the massacres of 1944 and 1999. Secondly, [this should be] a strong message to those who are healthy and able individuals to donate blood, and help those who are in need,” proclaimed Vitia.

Lindita Uka Hamiti, a resident of Prishtina and a doctor was one of the donors.

“I call on those who have yet to ever donate blood to do so, as there is a need for more contribution. I myself have been an active participant and as a doctor know the many circumstances where blood transfusions are vital to saving someone’s life,” said Hamiti.

The turnout for the event and overall participation from the general public is improving, according to Dr. Fadil Mahmuti who works at the blood transfusion center. Nevertheless, he urged more people to join the campaign and donate blood.

However, they hope this event will provide the exposure and awareness for such life saving cause.