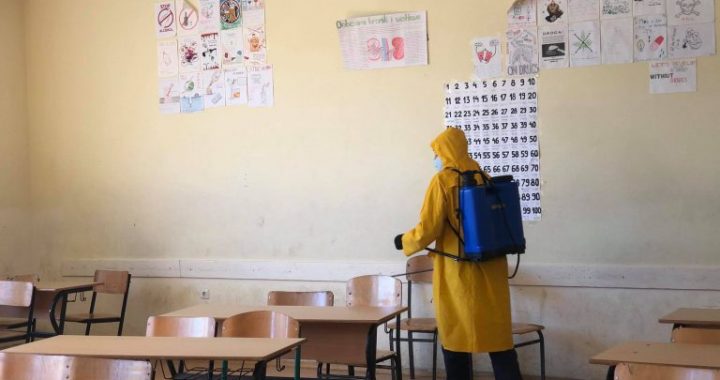 2020 was another difficult year in education with more misgovernance, political interference and poor test scores, while attempts to provide schooling during the pandemic often fell short.

Education systems across the world experienced a shock in 2020, with the spread of the novel coronavirus disrupting schooling on a global scale. According to a policy brief by the UN, around 1.6 billion students worldwide were affected by school closures during the pandemic.

Following the first confirmed cases in Kosovo in March, the government swiftly closed educational institutions at all levels, from kindergartens to universities, with around 420,000 pupils and students affected.

Around 10 days after the shutdown, the Ministry of Education started producing educational content for primary school (grades 1-5) pupils that were transmitted via the public broadcaster daily. Soon, there was a Zoom boom, and learners of all ages were holding classes on various video-call platforms, including university students.

This transition wasn’t as smooth as anyone would have liked. Despite having an internet penetration rate of 96.4 percent in households, there were reports of children not having any type of device that could support the video-calls required for classes, or to do their homework online.

There were also reports that children with special needs were not being offered the proper support because of a lack of curricula that would have enabled distance learning. Another challenge was pupils from Roma, Ashkali, and Egyptian communities having issues accessing online learning, with up to 51 percent reportedly not attending any online lessons.

The national exam for children finishing middle school was cancelled, with 14-year-olds moving on to high schools based on their grade average. Meanwhile, the post-high school national exam was postponed until August, causing a ripple effect on university admissions deadlines, and impacting the start date of the academic year at universities.

During this tumultuous year there were also management elections at the University of Prishtina. A new rector and new heads for the academic units were elected, though not without drama, because that would be impossible.

One professor had just resigned from his (supervisory) post as a member of the Steering Council at the University of Prishtina, when he submitted his candidacy to be rector (a managerial position). This was shut down by the Anti-Corruption Agency who stated, quite obviously, that you can’t have a managing position in the same institution in which you held a supervisory position in the previous two years.

Anyway, a new rector was elected, and you’d think all was well, but no. The Steering Council of the University of Prishtina consists of nine people: Five are elected by the Senate of the University from the list of academic staff, while the remaining four are appointed by the Minister of Education. When the new rector proposed his team of vice-rectors, the Steering Council were suddenly “too tired” to vote, and kept delaying the process. To this day, they still haven’t voted in the fifth vice-rector.

The new academic year started on September 14 for pre-university education, with children being separated into classes of 20 (which may sound normal, but Kosovo’s normal is class sizes of 30-40). Pupils also had to wear masks inside school buildings and received temperature checks each morning. The academic year for universities started on October 15, with most universities holding online classes in its entirety.

But there were also other exciting developments in higher education. In November, Armend Zemaj, law-graduate and Minister of Health, asked Rame Likaj, the third Minister of Education to serve this year, to increase the number of students at the Faculty of Medicine in the University of Prishtina by 50.

Zemaj explained that this was because “there are not enough doctors in our system, our doctors are leaving the country, and our medical staff is exhausted.” Which you know, would be fine, if it wasn’t illogical and illegal.

But ultimately, you cannot increase the student intake after the program has been evaluated by international accreditation experts that have set criteria for the number of students based on the capacities of the institution. This is largely because it constitutes exercising direct political interference on the Accreditation Agency, the exact reason the Agency was kicked out of its European umbrella agency in October 2019.

Questions over the autonomy of the Accreditation Agency were also raised in August, when Likaj appointed a member of his party, the Alliance for the Future of Kosovo, AAK, to the Agency’s State Quality Council.

The cherry on the cake, however, was a report titled “Trends in International Mathematics and Science Study”, which was published by the International Association for the Evaluation of Educational Achievement.

The test was conducted in 58 countries and measures 4th and 8th graders’ knowledge of maths and the sciences. Kosovo participated only in the evaluation of 4th graders, who came in 49th place for maths and 52nd place for sciences.

Ultimately, we can’t really blame the coronavirus for the quality of education students are receiving, as these results are the product of 20 years of mismanagement, corruption, underinvestment, and an absence of quality assurance. The pandemic has simply exposed the lack of preparation of Kosovo’s institutions for anything that doesn’t resemble the comfortable ‘normalcy’ of in-class dysfunction.