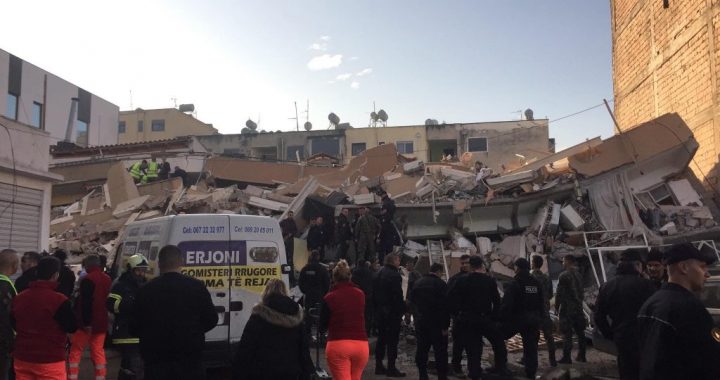 Day of mourning declared as two Kosovars among earthquake victims

Two brothers from Gjilan are reported to have been among those killed after an earthquake in Albania caused buildings to collapse, trapping many people inside.

Outgoing Kosovo Minister of Foreign Affairs Behgjet Pacolli has announced that two of the victims of Tuesday’s earthquake in Albania were Shemsedin and Isa Abazi, two brothers from Gjilan in eastern Kosovo.

At 18:30 on Tuesday evening, the death toll from the results of the earthquake stood at 21, with the search for people buried under buildings that collapsed in Durres and Thumane still ongoing.

More than 40 survivors are reported to have been found thus far, though dozens more are reportedly still trapped under the rubble. At 18:45, 14 hours into the rescue mission, a 30-year-old man was discovered alive and taken to hospital in Durres.

Ten of the deceased have been officially identified at Durres hospital, with the victims including five-year-old Arjela Lala and 80-year-old Sadik Qato.

Kosovo authorities have declared Wednesday November 27 a day of mourning. “As a sign of state and civic respect, Wednesday, November 27, 2019, is declared a day of state mourning in the Republic of Kosovo, following the earthquake in Albania, which left dozens dead and many injured,” President Hashim Thaci declared. State flags will be raised at half mast on all state buildings of the Republic of Kosovo, at home and abroad.

Kosovo institutions have joined the rescue operations in Albania, with specialized units of the Kosovo Security Force and the Kosovo Police assisting their Albanian colleagues. Earlier on Tuesday, the outgoing government convened for an extraordinary meeting, allocating 500,000 euros to help Albania cope with the damage.

Citizens across Kosovo have also launched initiatives to send emergency supplies to the affected areas, while others offered accommodation to Albanians left homeless by the natural disaster.