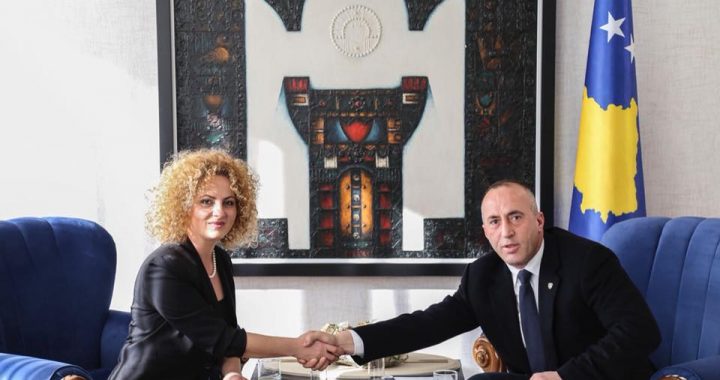 Donika Kadaj Bujupi and PM Ramush Haradinaj. | Photo courtesy of the Office of the PM.

Kosovo MP Donika Kadaj-Bujupi has left Vetevendosje to return to her former party, Alliance for the Future of Kosovo.

Donika Kadaj-Bujupi, a Kosovo MP who was found guilty for throwing tear gas in a bid to stop the border deal with Montenegro, has rejoined her former party, Alliance for the Future of Kosovo, AAK.

Kadaj-Bujupi originally joined the Kosovo Parliament as an AAK MP in 2007 and left Ramush Haradinaj’s party for Vetevendosje in 2016. At the time, the MP claimed that she was leaving AAK over disagreements about the use of tear gas to oppose the demarcation deal with Montenegro and the Association of Serb-majority municipalities. Originally, both opposition parties, AAK and Vetevendosje, had decided to use tear gas as a protest method, but eventually Haradinaj revoked his support for the ‘by all measures’ strategy the opposition was maintaining.

Now the vocal MP is returning to her original political herd.

“I discussed with MP Donika Kadaj-Bujupi the current political developments in Kosovo. From today, Donika will return to the Alliance for the Future of Kosovo parliamentary group,” Prime Minister Ramush Haradinaj announced on his official facebook page. “We will continue our journey through domestic political processes in unison.”

Update, 17:30: 12 other Vetevendosje MPs have filed a request to form a new parliamentary group.