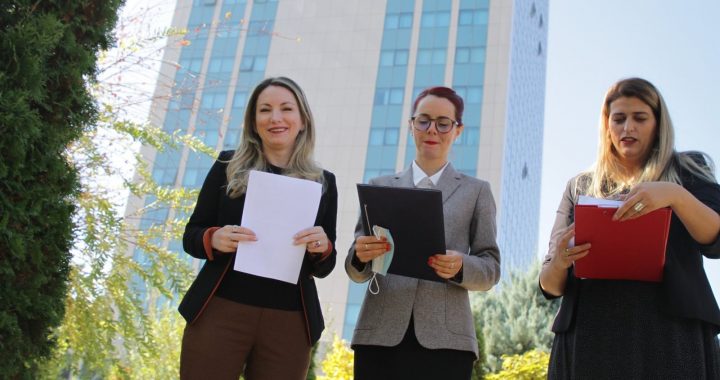 Environmentalists and rights groups welcome decision of Austrian-based company to withdraw lawsuits against two Kosovo activists who have campaigned against the construction of hydropower plants in western Kosovo.

Human rights watchdog Amnesty International on Wednesday welcomed the decision of an Austrian-based energy company to withdraw lawsuits against two Kosovo environmental activists who campaigned for years against the construction of hydropower plants in western Kosovo.

In June, Amnesty International called on KelKos Energy, a company that operates hydropower plants in a protected area in western Kosovo, to withdraw two lawsuits against Shpresa Loshaj and Adriatik Gacaferi and considered that the lawsuits had been filed in an attempt to silence them.

“Kelkos Energy was using these lawsuits to intimidate and silence activists from speaking out about the possible environmental damage caused by the company’s exploitation of Kosovo’s natural resources. Kelkos Energy’s decision to immediately and unconditionally drop these lawsuits is a victory for freedom of expression, but Shpresa Loshaj and Adriatik Gacaferi should have never been sued in the first place,” Jelena Sesar, Western Balkans researcher at Amnesty International, said on Wednesday.

In 2020, through two different lawsuits, the company sought 100,000 euros from Loshaj and 10,000 euros from Gacaferri after they campaigned against the hydropower plants. Loshaj, founder of the NGO Pishtaret, and Adriatik Gacaferi, a local activist from Decan/Decani, have been two of most vocal campaigners against the projects.

In Pristina, the lawyer Rina Kika who defended the activists, on Wednesday called the withdrawal of the lawsuits “a victory for freedom of expression”.

“Their withdrawal proves what we have constantly said, that Kelkos has known they cannot win on these baseless lawsuits but their aim has been to silence and intimidate activists,” Kika said.

Shpresa Loshaj said that she will continue to campaign against the hydropower plants.

“Despite the withdrawal, nothing has changed in Decan gorge and this is most important. Kelkos continues to operate there unlawfully even though Supreme Court has ruled that it cannot operate under these conditions,” she said.

Strategic lawsuits against public participation, SLAPPs, have become a frequently used tool by governments and corporations to target and harass human rights defenders and journalists exposing the wrongdoing of those in power.

KelKos Energy, which is a subsidiary of the Austria-based public energy provider Kelag International, told Amnesty International in June that the lawsuits were a measure of last resort to defend themselves against “slanderous statements” in court.

KelKos Energy has often been in the headlines in Kosovo over claims that its three hydropower plants in the Decan Valley are operating illegally.

Civil society groups and local residents say KelKos Energy has violated Kosovo’s laws limiting how much of a river’s water can be diverted for hydropower.

They have been protesting against the company since 2019, when it was reported that the plants’ licenses had expired five years earlier.

The activists’ first win was in July 2020, when the river water flow was returned to one of the branches of the Lumbardhi river in Decan/Decani, a few kilometres from a plant owned by KelKos Energy. The riverbed had been an empty pile of rocks for the five years of the plant’s operation.

Kosovo’s Energy Regulatory Office, ERO, banned the operations of the three KelKos-run plants in the Decan valley in October 2020. Former Economy and Environment minister Blerim Kuci told BIRN a month later that no environmental permits had been granted to the plants.

But an ERO board meeting concluded that KelKos in fact met all the legal criteria for a 40-year licence, after the Austrian company provided its environmental permit.

Meanwhile prosecutors in Peja/Pec filed an indictment against KelKos Energy in May this year for alleged damage caused by the plant’s pipeline.

The prosecution alleged that on April 30, 2020, a segment of three kilometres of highway, ready to be asphalted, for the Decan-Plava highway connecting Kosovo to Montenegro, was badly damaged.

The damage was “a result of the water flow from the canal [pipeline] which serves for the circulation and collection of water and its delivery for the supply of the hydropower plants administered and managed by LLC KelKos Energy – and as a result of the rapid flow of water, the whole soil collapsed”, prosecutors claimed.

In May this year, the court in Peja/Pec confirmed to BIRN that the case has been sent for mediation, meaning that if the parties reach an agreement, the case will be closed for further proceedings.