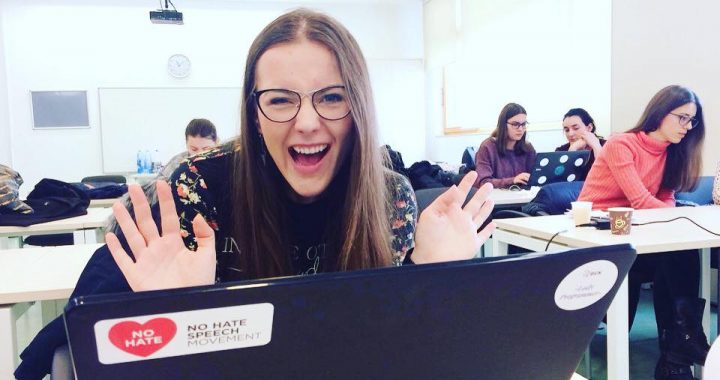 Armed with laptops and sleeping bags, 30 programmers have set up at Girls Coding Kosovo for their 48-hour non-stop hackathon, creating five different video games along with other teams across the world since Friday evening.

The world’s largest game creation event, Global Game Jam, will be hosted for the first time in Prishtina by Girls Coding Kosovo, GCK, this weekend.

Global Game ‘Jam,’ a reference to improvised musical sessions, brings together around 30 participants aiming to quickly create five different video game prototypes together in less than two days, trying out new ideas and bring fresh inspiration to the gaming industry.

Alborita Mehana, the project coordinator for GCK, explained what happens during the Global Game Jam event, also known as a hackathon.

“A hackathon is a sprint-like design event where computer programmers and others involved in software development, including graphic designers, interface designers and project managers, collaborate intensively on software projects,” said Mehana.

Girls Coding Kosovo began in 2014 as a small community of young women meeting and sharing their experiences in the field of technology from different sectors such as schools, universities, and the industry itself, and has continued to grow since then.

She said that GCK are testing the waters with this event to see if there is interest in developing games in Kosovo, with a view towards similar projects in the future.

“Think of Global Game Jam as a hackathon focused on game development,” she said. “It is the growth of an idea that in today’s heavily connected world, we could come together, be creative, share experiences and express ourselves in a multitude of ways using video games – it is very universal.”

As an organization, Girls Coding Kosovo aims to encourage women to reach their full academic and professional potential in technical fields. Its network spans across all municipalities in Kosovo and includes over 800 active young members aged between 15 and 25.

According to Mehana, because GCK’s mission is to empower young women in the technology field, her organization was the best choice for hosting the hackathon.

“This event will not only help us promote the organization in Kosovo but also beyond borders,” she continued. “This Jam will help our community to have new experiences and interesting challenges for the first time in Kosovo.”

Mehana and the team from GCK have been working intensively to prepare for the event.

“The only other things we needed to make this happen were a warm place, good internet, and a place where participants can put their sleeping bags – for those who are staying the whole night coding the games,” she said.

Until the Jam begins, the theme of the games to be developed are kept secret, to be released at 17:00 local time on Friday, said Mehana, and the whole event is streamed on Mixer, a live streaming platform for gamers that lets viewers participate in the gameplay itself.

The Global Game Jam is held in countries all over the world simultaneously, as close as Bulgaria and as far as Japan.

“This makes it possible to see other places in the world are doing and enables the rest of the world to see what we are doing at the same time,” she said.

GCK is constantly working on bringing events to the young and enthusiastic women in Kosovo to encourage them to code, launch companies or work as developers in other exciting startups in the country, said Mehana.

“Our vision is to create a free-of-gender-bias IT sector in Kosovo and the Balkan region by increasing the number of interested women in technology and programming, expanding the number of women to consider programming as an academic or commercial profession and encouraging young girls’ early exposure to coding and software programming,” she said.

Mehana considers GCK as fundamental to changing the current situation in the technology and programming industry.

“Technology is becoming an essential part of our daily lives,” she said. “There are many fields related to technology; internet, smartphones, social media. There is an obvious lack of women actively working in the technology industry.”

Mehana graduated in 2016 with a degree in computer science from the University of Business and Technology, UBT, in Prishtina. She began participating in all the trainings and workshops that GCK had to offer, such as Techstitution, Tech4Policy and Girls in ICT.

“Being part of these training, I always gave my best in programming, working in groups, helping others, socializing and so on. After that, I received an offer to work for Girls Coding Kosovo as a project coordinator for Code4Mitrovica,” said Mehana.

Code4Mitrovica gathered together 10 Serbian and 10 Albanian girls in the middle of Mitrovica, teaching them the basics of computer science and web development. Despite being a challenge, said Mehana, it went better than we planned.

“As a person, I always liked challenging myself and sharing knowledge with others, and Girls Coding Kosova has brought out the best in me,” said Mehana. “It’s where I found out that all that matters is finding the freedom to help others, it provides a sense of purpose, especially helping the women in the computer science field.”