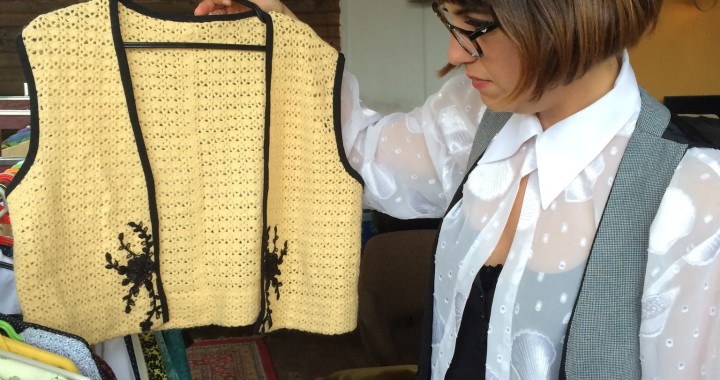 Inspired by classic films, Mad Men, and Prishtina street style, pop-up shop offers a handful of vintage items and secondhand items from the 20s-90s, all without breaking the bank.

It’s a Saturday and Shkolla e Mocme is full of racks of vibrant and somewhat unconventional clothes – a silk red Chinese kimono with orange flowers hangs near a yellow jumpsuit with a tag reading “Made in Yugoslavia.” More gems lay buried in the racks like a wedding dress with wide, flowing sleeves, the epitome of 70s fashion.

Layla Barake, the mind behind it all, is spotted in the cafe, sipping on her coffee and chatting with a few friends that have become loyal customers. She sells clothes here every Saturday. “It’s not a collection. There’s a difference because that means you make them yourself…..I just select things.”

She curates the clothes from a partner who buys them throughout Europe. Her hand-picked clothing, coupled with Shkolla e Mocme’s atmosphere are the core of the pop-up vintage boutique- Lilly’s Selection.

According to Barake, the inspiration behind the collaboration derives from Paris’ elite scene in the 1920s where wealthy women went to coffee saloons and shopped while models walked around.

However, the concept differs from Paris’ old street scenes especially since all of the clothes range from 5 to 20 euro.

“Lilly’s Selection does not exist for profit. It’s really for entertaining, it’s another concept besides just shopping,” she says.

In Prishtina, there’s no promise that the brands are original and even if they are, clothes are pretty expensive. Among the brands featured in Lilly’s Selection are Pierre Cardin, Levi’s, and Ralph Laur
en, all for less than 20 euro.

“I did my self discovery with Prishtina girls. I was always surprised with how good they’re looking. I was wondering how can they afford it because back in Switzerland to dress like that it costs a lot of money,” she says.

She found out that a lot of girls buy second hand clothes and then she started selling her own picks.

There’s an item in Barake’s collection from every decade between the 20s-90s. A lot of the clothing items she picks are inspired by icons, films and TV shows like Mad Men. 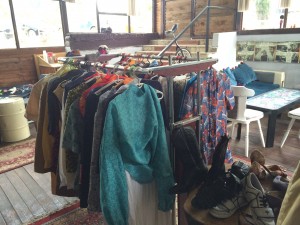 “We have one skirt that Demi Moore was wearing in Ghost,” Barake said. “Typical 90s style.”

It’s also a different style that isn’t usually seen on the streets of Prishtina where oxford shirts and blazers prevail- a style Barake refers to as “very uniform.”

When discussing the way women dress in Prishtina, she explained: “They’re looking for an identity and they want to be closer to Europe.”

Barake is originally from Fribourg, Switzerland. She has been living in Prishtina since 2012 when she started working on a few photography projects and decided to stay in Kosovo.

Besides showcasing her clothes, Barake also gives weekly photography lessons at Pjeter Budi and works for Kontour, an NGO in Kosovo that promotes tourism.

She admits, however, that Lilly’s Selection would be more profitable in Switzerland than in Prishtina because she finds that the Kosovo market doesn’t appreciate vintage items.

Partin Pruthi, Owner of Shkolla e Mocme, which means “the old school” in English, said the line fits in with the theme of the cafe.

“Everything here is old. It fits into the nature of our place because everything around here in secondhand. Everything is self-service, we want to make people feel at home.”

Barake wants to continue showcasing and selling her selections throughout the summer and invites others to sell clothes as well.

One of Barake’s customers, Ibe Sekiraqa, plans on collaborating with Barake and selling her clothes in the next few weeks.

Sekiraqa gloated about the clothes she’s bought from Barake, especially the original 60s skirt that she bought two weeks ago. “It was only 10 euro. People always ask me where did you find this? We can’t find stuff like this anywhere.”