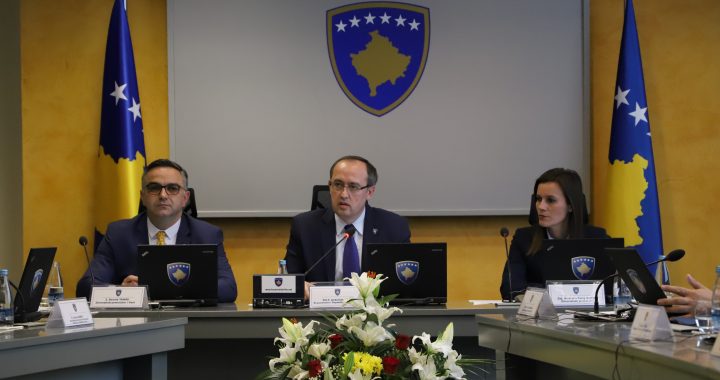 The new cabinet has repealed two decisions of the previous government that implemented reciprocal trade measures with Serbia, in an attempt to ‘remove all barriers to the Kosovo-Serbia dialogue.’

Two decisions taken by the previous government that introduced and then expanded reciprocal trade measures with Serbia were scrapped by the new cabinet at a meeting held on Saturday morning.

New Prime Minister Avdullah Hoti told a press conference after the meeting that the decision was taken in order “to remove all barriers to the continuation of the dialogue.”

The reciprocal trade measures were outlined by former prime minister Albin Kurti in February as a replacement for the 100 per cent tariff on Serbian imports imposed by the Haradinaj government in November 2018 that halted the Kosovo-Serbia dialogue.

However, the plans immediately drew strong criticism from Richard Grenell, the US Special Envoy for the Kosovo-Serbia dialogue, with disagreements over the measures in part bringing about the collapse of the Vetevendosje-LDK coalition government.

Extensions to the measures on May 30 requiring documentation stating ‘the Republic of Kosovo’ also drew criticism from Miroslav Lajcak, the EU Special Representative for the Kosovo-Serbia Dialogue, and Serbian foreign minister Ivica Dacic, who described the measures as worse than the 100 per cent tariff.

Hoti said on Saturday that repealing the government decisions enabling the measures was “a result of cooperation with our international partners and the pledges we have made to remove all barriers to dialogue,” adding that he confirmed his intentions to the US ambassador on Friday.

However, Hoti also stated “that if the dialogue does not bring the expected results we maintain the right to re-install these measures.”

President Hashim Thaci welcomed the move, urging for the quick resumption of the Kosovo-Serbia dialogue. “International pressure should now be directed towards Serbia in order to hastily resume the dialogue, which should be concluded with mutual recognition between the two countries,” the president wrote in a Facebook status.

Serbian President Aleksandar Vucic echoed his Kosovo counterpart in praising the decision to remove the measures. “I believe in the strength of the Serbian economy and that good relations can be established between Serbs and Albanians, and that both can have large benefits,” Vucic told TV Prva.

The new cabinet was not entirely united in their decision to repeal the decisions, with ministers provided by former prime minister Ramush Haradinaj’s Alliance for the Future of Kosovo, AAK, party voting against the motion, including Deputy Prime Minister Besnik Tahiri and foreign minister Meliza Haradinaj.

Albulena Haxhiu, who served as justice minister in the Vetevendosje-LDK government condemned the decision to remove the measures, describing it as a surrender of Kosovo’s sovereignty. “The illegal government is paving the way for Thaci to reach a deal with Serbia,” said Haxhiu.