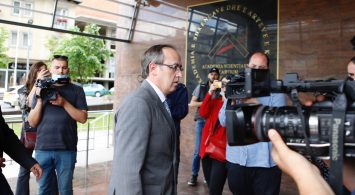 Prime Minister Avdullah Hoti has presented the government's new framework for the Kosovo-Serbia dialogue, stressing the importance of Kosovo’s territorial integrity and the need for mutual recognition.

Introducing his new framework for the Kosovo-Serbia dialogue at the Academy of Science and Arts on Wednesday, Kosovo Prime Minister Avdullah Hoti set out his main working principles, as well as plans to build cross-party political consensus on the dialogue.

Hoti stated the aim of the dialogue was to create “reciprocal recognition that immediately secures a seat at the UN and also secures immediate recognition from the five EU member states that have not yet recognised Kosovo.”

Hoti, who was appointed a week ago, said that the dialogue can only take place provided it respects the principles laid down in the Kosovo Constitution, adding that it will be led by himself.

The prime minister stressed that the government aims to address open issues between the two countries, including persons still missing from the Kosovo war, wartime reparations, and the reinstatement of pensions that were terminated in June 1999. He stated that the government would also seek to address the return of cultural and historical artifacts to Kosovo and the long list of technical issues that are still pending resolution between the two countries.

“I believe that with mutual recognition and membership to the UN, these issues will be more easily addressed in accordance with the international conventions that need to be implemented to normalise relations between the two countries,” said Hoti.

Regarding representation in the dialogue, the prime minister stressed that his government intends to establish a forum of political leaders in the country, in order to try and foster political consensus concerning the dialogue.

“This forum will not take any competence that the prime minister, the Assembly, the president or any other institutions hold,” Hoti said. “It will be a forum through which I will inform [political leaders] about the position that I will hold as prime minister in the dialogue process and, after each round of the negotiations, I will inform them in detail about the progress we have made.”

Hoti said that he also intends to establish another team within the Prime Minister’s Office composed of experts from outside of his government and the political parties represented in the Assembly.

“Here we have thought to include people with expertise from civil society and academic institutions,” Hoti said, adding that he would seek to find people with experience from previous negotiations with Serbia, including from previous meetings at Rambouillet [1999], Vienna [2005] and the EU-facilitated dialogue.

On Thursday, president Hashim Thaci stated that he will be involved in the dialogue and that he is not competing with the government. “The country’s president represents the country at the domestic and international level, everything is set out in the constitution” said Thaci. “In this regard we must complement each other.”

Thaci also reiterated his support for the prime minister’s removal of reciprocal trade measures with Serbia. “I welcome Mr. Hoti’s decision to remove the obstacles to the continuation of the dialogue. Now, Prishtina is no longer an obstacle,” he said. “Kosovo must be ready to respond to any call from the United States.”

Meanwhile, Vetevendosje, the largest opposition party at the Kosovo Assembly, have already distanced themselves from Hoti’s plans for consensus building. Arlind Manxhuka, the spokesperson for Vetevendosje, announced that no representatives from the party will be part of discussions on the future of the dialogue.

“A government dependent on and enabled by the votes of Lista Srpska and formed by and for President Thaci, as well as a government that deprives the state of Kosovo of reciprocity with Serbia has neither credibility nor legitimacy,” said Manxhuka.