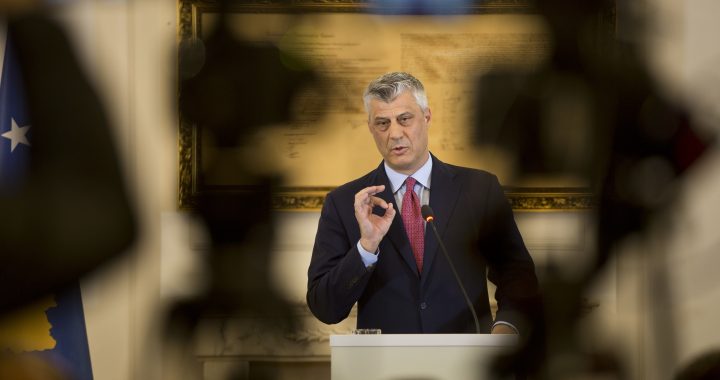 Kosovo president Hashim Thaci gestures during a press conference in capital Prishtina, Kosovo on Wednesday, March 8, 2017. NATO and the United States warned Wednesday they could scale back cooperation with Kosovo's security services if the government goes ahead with plans to transform its lightly-armed security force into an army. (AP Photo/Visar Kryeziu)

President Hashim Thaci has said that he will not be seeking a second term when his mandate expires next April, drawing a line under a political career that has lasted over two decades.

After more than 20 years spent in Kosovo’s political arena, President Hashim Thaci on Thursday announced that he will no longer be involved in politics once his mandate ends in April next year.

“I will not be a candidate for president in the upcoming elections,” Thaci assured Albanian TV station Syri TV on Thursday evening, adding that he would quit politics at a time when the “country is on the right path”.

According to Thaci, “it is enough after two decades of political responsibility,” adding that he wants to have “another life, outside political and institutional life.”

Thaci was elected President on February 26, 2016, and took his oath on April 7, starting a five-year term.

Before becoming President, Thaci held numerous senior political positions in Kosovo. Born in 1968, Thaci studied in Prishtina and Zurich, where he became involved in separatist activity against the then Serbian regime.

In the late 1990s, he joined a new guerilla force, the Kosovo Liberation Army, KLA, which took on the Serbian authorities, becoming the KLA’s political leader and leading the political dialogue on its behalf with Serbia at failed talks held in Rambouillet, France, in February 1999.

The talks’ collapse, as fighting escalated in Kosovo, resulted in NATO’s military intervention in 1999, and the enforced withdrawal of Serbian forces from the then province.

Thaci then took off his uniform and entered politics. After his Democratic Party of Kosovo, PDK, won the parliamentary elections in 2007, he was elected prime minister of Kosovo in January 2008, just before Kosovo declared independence from Serbia. On February 17, 2008, then prime minister Thaci read out the declaration of independence in the Kosovo Assembly.

Thaci was mentioned in Swiss politician Dick Marty’s report to the Council of Europe in 2010, accusing former KLA members of having committed serious war crimes in the independence struggle with Serbia including organ trafficking. He was reportedly summoned before the Kosovo Special Chambers in the Hague, established to try former members of the KLA for the alleged war crimes. Thaci has denied such claims to BIRN.