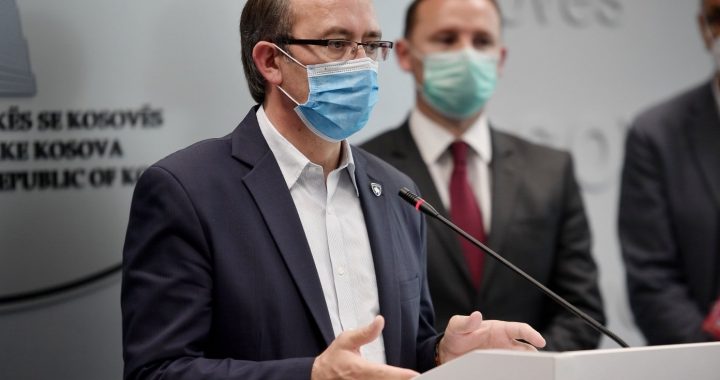 The prime minister insists he self-isolated immediately after being tested for coronavirus on Sunday following MP Mimoza Kusari-Lila’s accusations that he ignored protocol and endangered citizens.

On Sunday night, Prime Minister Avdullah Hoti announced via his Facebook account that he had tested positive for coronavirus. “From tonight I am in isolation for the next two weeks,” Hoti stated, adding that he had no symptoms except for a mild cough.

Responding to the news, MP Mimoza Kusari-Lila, who leads the Alternativa party, stated that Hoti’s failure to self-isolate prior to the test was yet another reason for his removal as prime minister.

“Since he did not feel well and had reason to be tested, why was not Mr. Hoti not isolated?” she stated. “Why did he do the opposite of the protocol which suggests that people should self-isolate between testing and getting the result?”

In response, Hoti argued that he was tested at 16:00 on Sunday and went into self-isolation immediately. “Although I did not have any serious concerns, with the appearance of a mild cough on Sunday, my co-workers recommended that I be tested,” he stated.

“I did the test on Sunday around 4 p.m. At the moment I was tested, I was isolated in anticipation of the result, as this is the protocol recommended by doctors,” Hoti added.

Kusari-Lila replied that the short turnaround time for Hoti receiving his results was an insult to many families who were denied access to deceased loved ones due to fears of spreading the virus, only to learn days later that the test was negative.

She added that the prime minister’s recent actions, including inaugurating a road and attending the Kosovo football cup final, violated the National Institute of Public Health’s guidelines, and that Hoti could not “claim amnesty” after discovering he was infected.

The prime minister is one of more than 3,600 active cases of coronavirus confirmed in Kosovo, with the National Institute of Public Health reporting 469 new cases over the weekend from 902 tests performed. On Sunday, the Institute stated that the number of deaths linked to COVID-19 had reached 249.

This is an increase of 94 patients since last Sunday, July 26, when 354 COVID-19 patients were reported to have been hospitalised. With the number of patients being treated at UCCK rising, beds in the maternity ward have been repurposed for COVID-19 patients.

Microbiologist Lul Raka, who also heads the government’s advisory board for COVID-19, told Voice of America on Sunday that the country’s health system is seriously in danger. “The main risk is the overload of capacities, and the management of the current numbers [of patients] by the Kosovo health institutions that deal directly with COVID-19,” Raka said.