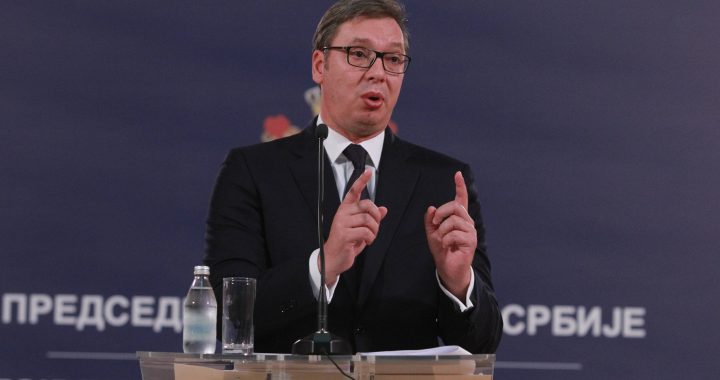 Serbian President Aleksandar Vucic says he is ‘surprised’ by Avdullah Hoti’s claim that a final agreement is being prepared at expert level meetings between delegations from Kosovo and Serbia in Brussels.

At a press conference in Belgrade on Thursday, Serbian President Aleksandar Vucic contradicted statements made by Kosovo Prime Minister Avdullah Hoti that a final agreement between the two countries is being drafted as part of ongoing discussions mediated by the EU.

“I am surprised by Avdulah Hoti’s statement that a final agreement is being written in Brussels,” Vucic told the press conference. “We don’t know anything about that.”

At a session of the Kosovo Assembly on 24 July, the prime minister told MPs that the chapter of the final agreement related to missing persons from the war in Kosovo was drafted at the meeting.

The Serbian president’s comments came on the morning of the second expert level meeting. The meetings mark the resumption of the EU-facilitated dialogue, which kicked off with a summit between Vucic and Hoti on 16 July following a suspension in talks that lasted more than 18 months.

Vucic stated on Thursday that the Serbian delegation would seek to use the meetings to discuss the non-fulfillment of agreements made in 2013, specifically those regarding the Association of Serb-majority municipalities.

At a press briefing, Peter Stano, the EU’s lead spokesperson for external affairs, refused to comment on whether an agreement was being drafted.

Stano added that the EU was simply facilitating the dialogue with the aim of helping both sides to arrive at a final agreement on the normalisation of relations. “This agreement will be done and ready for signature once both parties agree on all outstanding issues,” he said.

The EU spokesperson stated that the topics discussed at Thursday’s meeting included displaced persons and economic issues. He added that the next meeting between Vucic and Hoti would take place in September, with expert level meetings held in the interim period.

BIRN contacted the Office of the Prime Minister and Skender Hyseni, Kosovo’s State Coordinator for the Kosovo-Serbia Dialogue for further comment on the ongoing negotiations in Brussels, but received no response.