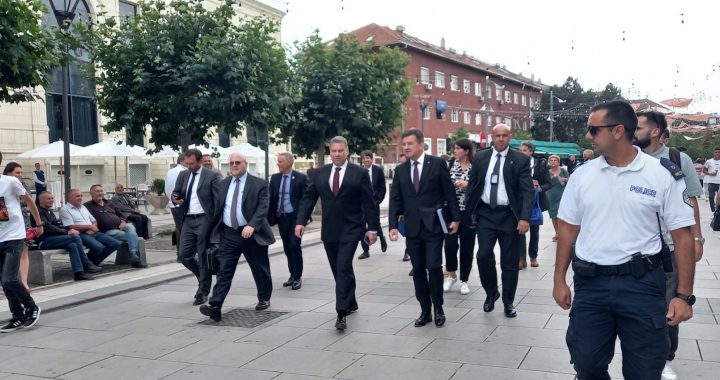 US envoy Gabriel Escobar (middle left) and his EU colleague Miroslav Lajcak (right) in a Prishtina square on their way to meet Kosovo President Vjosa Osmani on Wednesday. Photo: BIRN

As EU and US envoys arrived in Prishtina in an attempt to find a compromise solution to a dispute with Belgrade over vehicle licence plates and ID documents, both sides insisted that they will not back down.

EU and US envoys Miroslav Lajcak and Gabriel Escobar landed in Prishtina on Wednesday in an attempt to bridge differences between Kosovo and Serbia ahead of September 1, when the Kosovo authorities intend to bring in regulations on vehicle licence plates and ID documents for border crossing which Serbs strongly oppose.

Kosovo Prime Minister Albin Kurti said on Wednesday that he is ready to find a solution with Serbia but there must be equal treatment for Serbs and Kosovo Albanians.

“We will either have entry-exit papers for both sides or for none. Any option is acceptable for us. We want reciprocity,” Kurti told journalists in Prishtina.

The Kosovo government wants Serbs entering the country to be issued an entry-exit document as Kosovo Albanians have to do when entering Serbia and cease the use of Serbia-issued licence plates.

Kurti said that when he met Serbia’s President Aleksander Vucic last week in Brussels, he declined a Serbian suggestion of returning to the use of ‘status-neutral’ licence plates which were issued by the UN’s UNMIK mission until 2008 when Kosovo declared its independence from Serbia, and which were used by Kosovo Serbs until 2020.

“The asymmetry where Kosovo is more an issue than a side will not happen anymore… the Republic of Kosovo does not produce UNMIK plates,” he added.

Meanwhile representatives from four Serb-majority municipalities in north Kosovo assembled in the town of Zvecan on Wednesday to approve a statement in which they threatened to leave Kosovo’s institutions if the government imposes its decisions on IDs and licence plates on September 1.

“If there is no compromise decision, we Serb representatives, together with all our compatriots, will start the process of leaving all Kosovo’s institutions at all levels including police, courts and prosecution,” the statement said.

The changes announced by the Kosovo government triggered renewed tensions at the end of July when Kosovo Serbs set up barricades and Kosovo police closed the country’s border crossings.

Kosovo and Serbia have been involved in EU-facilitated dialogue since 2011, but the Kosovo Democratic Institute (KDI), a Pristina-based think tank, concluded in a study published on Tuesday that the eventual outcome of the process is still unclear.

“Although many agreements have been reached, dialogue has produced ambiguity,” said Violeta Haxholli from the KDI.