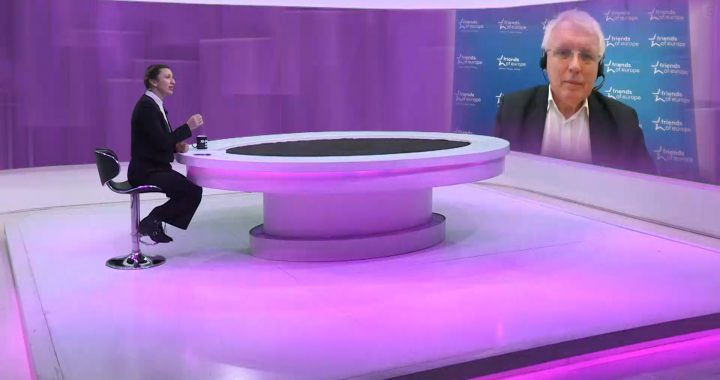 In an interview with Jeta ne Kosove, former NATO spokesperson Jamie Shea NATO reflects on the tensest moment of alliance air campaign against Serbia – when Russian forces suddenly showed up in Kosovo.

Jamie Shea was the public face of the NATO campaign to drive Serbian forces out of Kosovo in 1999.  Admired in Kosovo and reviled in Serbia, his was an inescapable presence on TV for months.

Today, the now retired NATO veteran has a lower public profile as Professor of Strategy and Security at Exeter University in southwest England.

In an interview for BIRN on the NATO campaign, which terminated Serbian rule in Kosovo, he recalled “shocked and tense moments” in June 1999 when Russian troops entered Kosovo from Bosnia and seized Prishtina airport before NATO troops had even arrived.

For days, there was talk of a showdown, or even war, between NATO and Russia over the then Serbian province.

“The real danger that we had on that particular day was the worry that the Russians would send in specialized forces, more forces, directly from Russia, over Eastern Europe and in to Kosovo to reinforce the Russian troops that had moved in, so we would be dealing with a much larger Russian contingent, which could occupy the northern part of Kosovo or another sector,” he recalled.

That prospect made NATO planners worry that Kosovo was about to be divided like Germany between Russian and Western zones.

“Think of Berlin in the Second World War,” Shea explained, recalling the East-West partition of the Germany capital after the war that lasted almost half a century.

For Shea, that particular tense moment ended when the Czech Republic, Hungary and Poland, which had just joined the North Atlantic alliance, blocked their airspace and so prevented Russia from sending in additional troops by land or air.

Ultimately, the contingent of Russian troops withdrew in a matter of months, Shea recalls, leaving NATO in sole control of Kosovo’s territory. The stand-off ended.

Thousands of Serbs fled Kosovo in the aftermath of the collapse of Serbian rule, but Shea says NATO prevented full-on ethnic cleansing of the type that happened in Bosnia.

“I’m glad that NATO was able to stop the ethnic cleansing in Kosovo and learned the lessons of Bosnia that were very tragic indeed,” Shea said.

Twenty decades on, Shea does not underestimate the risk of Russia extending its influence in the region.

But he also insists that the Balkans is well oriented towards Euro-Atlantic integration overall and Russia has gained little.

“If you take a step back, particularly over these 20 years, and look at what the general direction has been, it’s been overwhelmingly 99 per cent of the region coming closer to the NATO, EU structures and Euro-Atlantic integration,” he said.

“If I were president [Vladimir] Putin, I would certainly not see that I am the winner in this process,” he stated firmly.

Shea expresses pride that he contributed to what he calls bringing freedom to Kosovo Albanians.

But he does not support all recent developments in the country, especially related to the formation of an army, which NATO has criticized.

He expressed doubts before about the wisdom of transforming the lightly armed Kosovo Security Forces, KSF, into a regular army back in 2017, in another interview for BIRN.

He remains skeptical today about how things have been done.

Instead of changing the constitution to form an army, which would have required the support of Serbian minority MPs, Kosovo opted for a backdoor route, merely changing the existing KSF’s powers.

He said that sticking to the normal procedure, which involves wide-ranging consultation with NATO, local stakeholders and minorities, would have made for a more “multi-ethnic force”.

However, Shea insists that Kosovo is internationally secure and hopes Kosovo society will concentrate more on such issues as education rather than security.

“There are some NATO member that would be happy to have 5,000 NATO troops on their territory, so Kosovo is an internationally protected country,” he concluded.