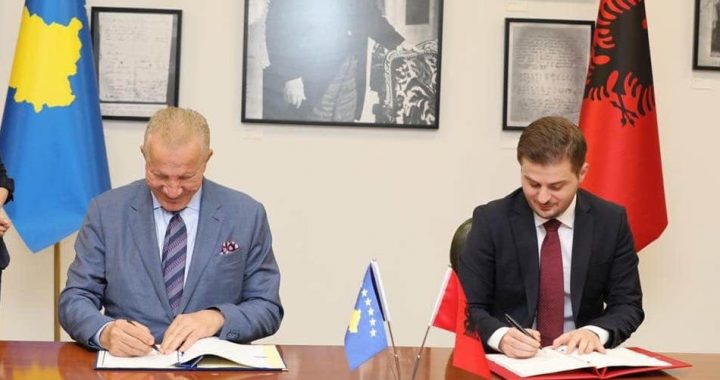 Kosovo and Albania signed a landmark agreement to coordinate their foreign policies and unify their diplomatic missions – though some experts doubt it will mean much in practice.

Kosovo and Albania have signed an agreement on unifying and coordinating their foreign policy, which will include joint embassies.

Kosovo Foreign Minister Behgjet Pacolli visited his counterpart Gent Cakaj in Albania and they together signed the agreement on Tuesday.

The two states agreed to closely coordinate foreign policy, create joint diplomatic missions and share staff and experience for the implementation of their own national interests, Pacolli wrote on Twitter.

“This is a big step ahead to come together in front of the world and act as a [single] nation,” he continued, referring to the fact that both Balkan countries are mainly ethnic Albanian.

Albanian Foreign Minister Cakaj said he felt honoured to conclude such an agreement. “It opens new horizons for joint institutional action as we move ever closer towards deep national integration,” Cakaj wrote on Twitter.

But not everybody believes the agreement will be carried out in practice.

“The same happened at the joint meetings of our governments [of Kosovo and Albania]. It is more like a patriotic show than a concrete political action for the improvement of our relations,” Nezir Kraki, analyst and professor of European Policies at Université Paris-Est Créteil, UPEC, told BIRN.

He noted also that the foreign policy of Albania “is not at all in line with that of Kosovo”.

“Kosovo has other concerns. Albania should not be tied to Kosovo but continue on its path”, he added. For now, he believes, it is enough for each state not to be an obstacle to the other.

On Monday, commemorating a battle between Serbian forces and the Kosovo Liberation Army, KLA, in Pashtrik during the war of independence from Serbia, Thaci went further, asking the Kosovo and Albania parliaments to take action.

“New circumstances are being created, and the best solution would be that two parliaments, of Kosovo and Albania, approve the statements of the people’s wish to live in a single state,” he said.

Reviving an option that has historically been only a “dream” for many Albanians has put Thaci back in the limelight of TV debates in Kosovo and Albania.

However, Kosovo Prime Minister Ramush Haradinaj, one of the strongest opponents of the border correction policy, has said he is not convinced about the prospect of instant unification with Albania.

“This is a century-long project but, in this phase, I think the most important thing is to deepen cooperation between Kosovo and Albania and remove bureaucratic and administrative hurdles,” Haradinaj told journalists last week.