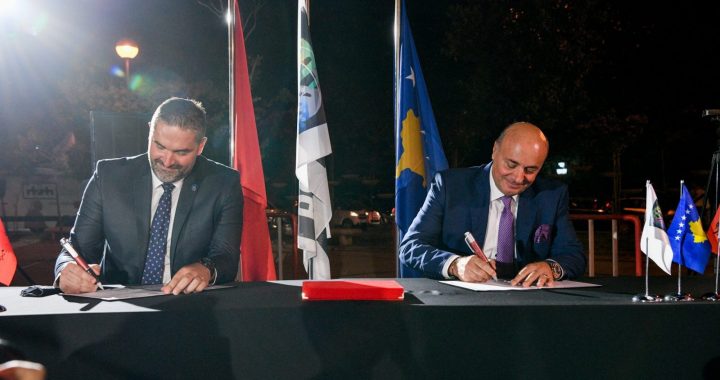 The Albanian and Kosovo basketball federations have agreed to create a united league – a merger that Albanian Prime Minister Edi Rama hailed as a model for other sports to follow.

A single united Albanian and Kosovo basketball league is to be set up and start competing next month, with the four best Albanian and four best Kosovo teams likely to join.

Albanian Prime Minister Edi Rama, who observed the signing ceremony in Albania’s capital Tirana on Thursday, said he hopes other sports in Albania and Kosovo follow the same model.

“This league raises the level of competition and creates room to have more quality in matches,” Rama said.

“It seems strange that this was not initiated earlier, or why only basketball is doing it, but of course we needed a period of maturity for these ideas, these wishes, which have existed for a while,” he added.

Plans for the merger were initially raised earlier this year.

The head of the Kosovo Basketball Federation, Arben Fetahu, hailed the endeavour as “a major project” and expressed his delight that it had been finalised.

“I believe this will be a special league and will promote Albanian basketball in general. Since day one we’ve had obstacles, but we didn’t stop and have overcome all of them,” Fetahu said.

His Albanian counterpart, Avni Ponari, said a unified basketball league had been his aim since he took over the Albanian federation in 2007. “Now this league has won support from all sides … I believe this league will take Albanian basketball toward success,” Ponari said.

On the same day the agreement was signed, the new league elected a board and a director.

The merger was welcomed by Turgay Demirel, head of the governing body of basketball, FIBA, in Europe, and who was present at the ceremony. “Basketball now needs novelties and new forms of cooperation in order to raise interest but also the level of the competition,” Demirel said.

Kosovo is among the newest members of FIBA after being admitted in 2015.