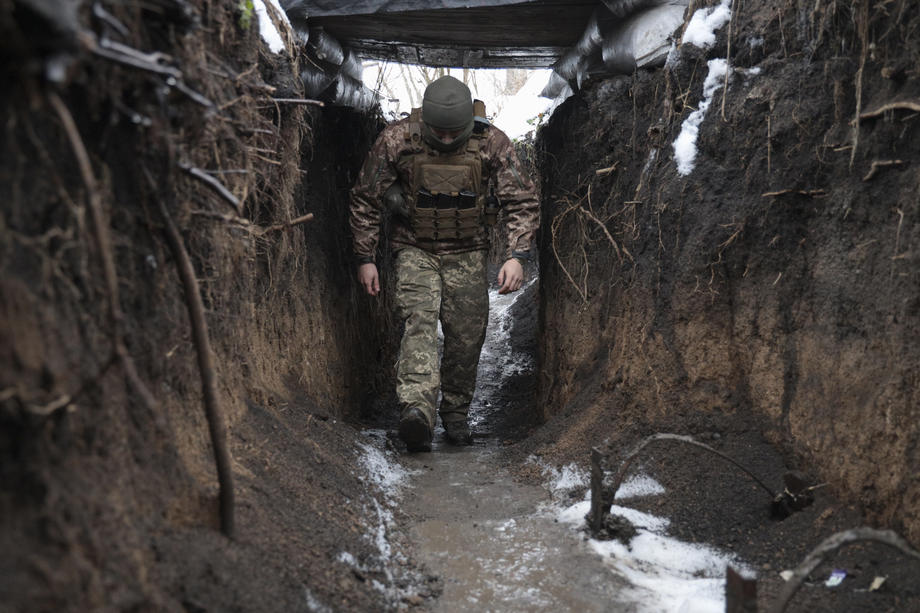 A Ukrainian serviceman patrols at the front line, not far from the pro-Russian-militants-controlled city of Donetsk, Ukraine, 02 February 2022 amid escalation on the Ukraine - Russian border. EPA-EFE/STANISLAV KOZLIUK

Officials in Tirana, Pristina and Sarajevo said they were baffled by Russian Foreign Minister Sergei Lavrov's claim that 'mercenaries' from these countries were heading to the frontlines in Ukraine.

Officials of Albania, Kosovo and Bosnia and Herzegovina have rejected claims made by Russian Foreign Minister Sergei Lavrov that these countries are sending “mercenaries” to fight in Ukraine, where there are fears of a Russian invasion.

Moscow-based news agency Russia Today quoted Lavrov on Friday as saying that they are working to verify information about “mercenaries” from Albania, Kosovo and Bosnia going to Ukraine.

“Kosovo and some other parts of the Western Balkans are becoming a hotbed of crime. There are terrorists, drug dealers. Mercenaries are recruited there for military conflicts ignited by the US, among others,” Lavrov said.

“There is information that militants from Kosovo, Albania, and Bosnia and Herzegovina are being recruited to knock Russia off balance, which includes sending them to Donbass [in eastern Ukraine],” he added.

Blerim Vela, chief of staff to the President of Kosovo, on Twitter dismissed the comments as a “fake news alert”.

“Russian FM Lavrov’s false accusation that Kosovo is providing mercenaries to Donbass is part and parcel of a disinformation campaign that seeks to justify military aggression against Ukraine. Kosovo stands with its allies and Ukraine in defending freedom and democracy,” Vela wrote.

In Albania, ruling Socialist MP Pandeli Majko, a former Prime Minister, said the comments were “unprecedented”. He also noted: “Indian TV Channel WION has done a chronicle about the map of the ethnic background of volunteers who have gone to help Ukraine.”

BIRN asked the Kosovo and Albania governments to comment on Lavrov’s allegations but neither replied by time of publication.

Bosnia’s Security Ministry said that, according to available data, no citizen of Bosnia had gone to fight alongside Ukrainian forces.

“We will send an official inquiry to Russia’s embassy in Sarajevo about this statement. If Lavrov has some information on such activities in Bosnia, I hope that, before revealing it, he shares them with our security services,” Bisera Turkovic, Bosnian Foreign Minister, said ironically on Friday.